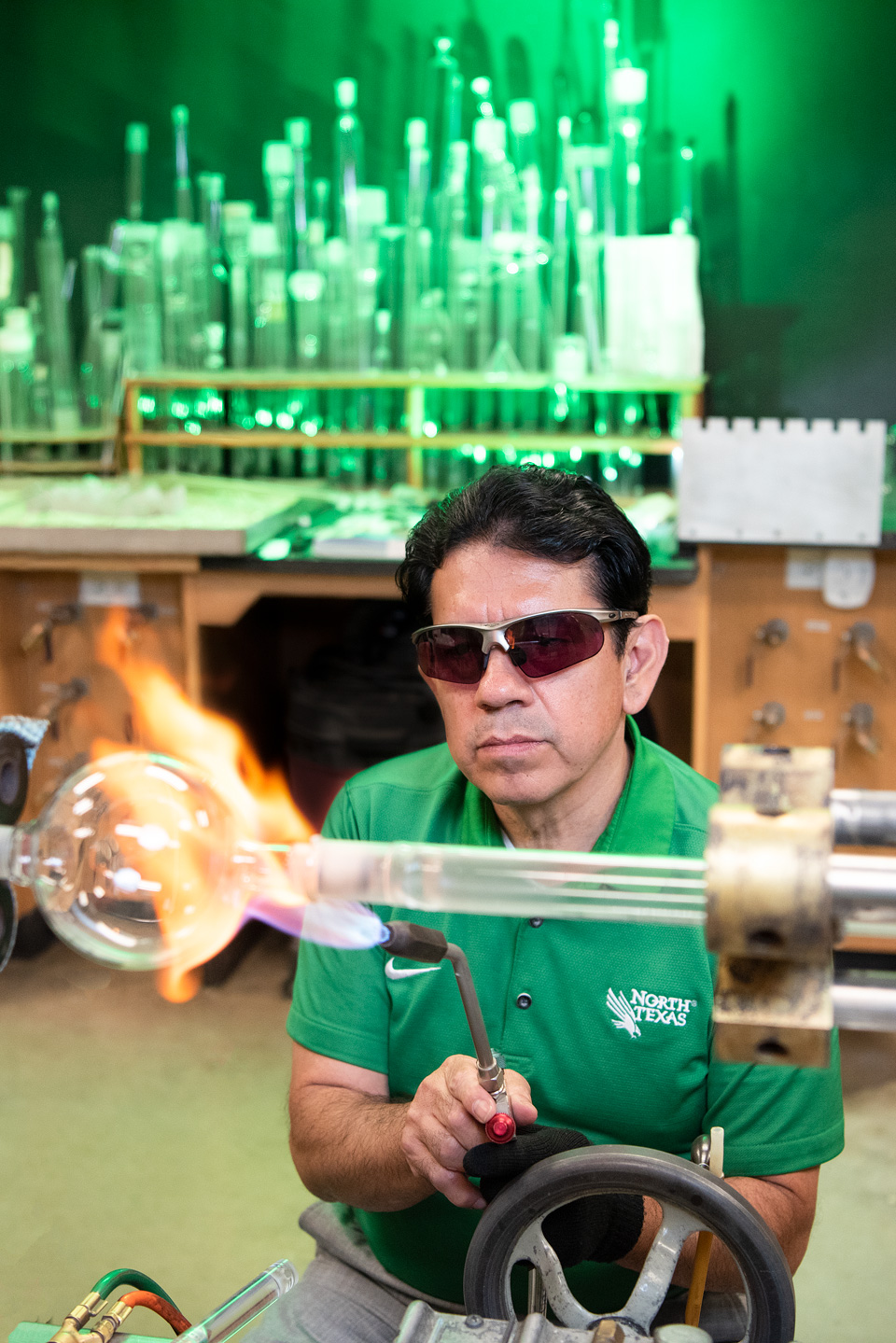 Witnessing Roger Ramirez turn molten glass into a test tube is akin to watching a conductor lead his orchestra.

Ramirez, a glassblower in UNT's College of Science, spends his days forming the equipment that faculty and students use in their research and experiments.

"Every day is a challenge, which I love," Ramirez says.

He creates hundreds of pieces of lab equipment each month for UNT and other institutions.

"I really go into my own world when I am working," he says. "It is a very calming and artistic process."

Collaborating with UNT scientists and researchers is his favorite part of the job, according to Ramirez.

"I really get to be a part of the experience by making my suggestions and working with them so that they get exactly what they need," he says. "To know that I am part of the discoveries that will come from the work they are doing is a thrill."

LeGrande M. Slaughter, professor and interim chair in the Department of Chemistry, says Ramirez is a great resource for faculty and students who do laboratory research.

"He can build any specialized glass apparatus you can dream up, and this allows us to be more creative in designing cutting-edge experiments in our research projects," she says. "Scientific glassblowing is a disappearing art, and Roger is one of the best in the trade -- not to mention the only scientific glassblower in the Dallas-Fort Worth area."

Ramirez first arrived at UNT in 1987 after learning the art of glassblowing at the University of Houston. He left UNT in 1994 to pursue his own glassblowing business but returned last February.

"It is good to be back home," Ramirez says.

He also continues to create his own work at his home studio, where he even crafted a playable glass trumpet.

"It was just a nice bonus that you could play music with it, but not my intention," Ramirez says with a laugh.

While he now sticks to making scientific equipment, he was once asked by former UNT President Alfred Hurley to create four glass eagles for an awards ceremony.

"I figured it out and surprised myself with that one," he says.

Now he is passing on his skills to the next generation, as one of his sons and his brother also are glassblowers.

And it is extra special for Ramirez to pass on what he has learned since he almost didn't finish high school.

At 17, he dropped out of high school, but with the encouragement of his family, returned and earned his degree.

"It's never too late to pursue your dreams," he says. "You never know what life will bring your way."