Get to know
Burlyce Logan

Read a Q&A with Burlyce 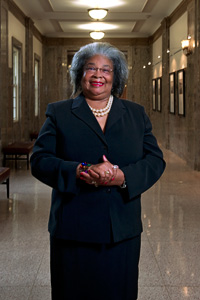 At 73 years old, and more than 50 years after taking her first classes at North Texas, Burlyce Sherrell Logan wore her cap and gown and walked across the commencement stage this May.

The first step in the desegregation of North Texas took place in 1954, when the first African American graduate student enrolled. In fall 1956, Logan was a member of the first full class of freshman African American students. She planned to major in music and looked forward to making friends, playing piano and earning her degree.

What she didn’t expect was to watch crosses burn in her front yard, to be pelted with rocks or to be pushed into traffic on her walk to class.

“The first year was the hardest,” she says.

Logan found peace in her music classes while she was on campus, where she said music students and professors treated her like any other student. She could count on choir practice or playing the piano to lift her spirits and give her a break from the environment around her.

“But after two years, I had to leave,” Logan says. “I just couldn’t take the pressure. But, that was then. Today is a whole different world.”

When Logan left in 1958, she decided to move on with her life, but she knew one day she would finish her degree. She got married, raised children and moved around the country, ending up in California and Oregon. And in 1996, homesick, she called UNT and learned there were job openings.

Logan packed her van and drove to Denton from Klamath Falls, Ore.

Logan held a few different jobs in Denton during the next 10 years, including work at UNT. And in 2005, almost 50 years after she first enrolled at North Texas, she enrolled in classes again.

“I am so glad I came back to UNT,” Logan says. “The culture is completely different. The fabric of this campus is colorful, and it makes me feel good to be a part of the pattern. People are just plain nice and friendly, and I don’t feel afraid. I can finally study and be comfortable.”

She says the “only sadness about this journey” is that her parents, who died in a house fire in 1982, were not here to see her walk across the stage. “But, I know they were here in spirit,” says Logan, who was cheered on at commencement by about 40 family members.

After earning her bachelor’s degree in applied arts and sciences, Logan plans to start working on a master’s degree in history in the fall.

University officials note that Logan and other pioneers made a difference for all future generations of students.

“Burlyce Logan and all those who set foot on the UNT campus, or any college campus, opened the door for African Americans today,” says Mona Hicks, assistant vice president for campus life. “I wish every prospective and current student and graduate could learn about Burlyce and be proud of the courage she has added to the UNT legacy.”

Logan hopes her story will inspire students and says she sees the impact she and her 1956 classmates had every time she comes to campus.

“I do think we made an impression,” Logan says. “The people who were here were already indoctrinated to the way it was. The world has evolved, and people with it. This campus is made up of young people who want to study, get an education and change the world. They make their own decisions and will make this world a better place.”

The Chronicle of Higher Education >>