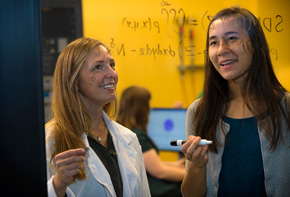 After oxygen tanks exploded on the Apollo 13 spacecraft in 1970, NASA engineers rushed to work through equations that would stabilize and guide the damaged craft through a slingshot maneuver around the moon and return the crew back to Earth safely.

The scene plays out dramatically in the 1995 Ron Howard film Apollo 13, which Maria Moreno, a UNT senior studying computer engineering, watched at home one evening after a busy school day.

"My teacher had just shown me some of the calculations the NASA engineers were doing, and I was like 'Whoa! I just learned this!'" Moreno says. "It really grew my passion and interest for NASA."

Many of UNT's STEM – science, technology, engineering and math – programs are seeing an increase in students like Moreno, who come to UNT with an interest in fields including construction engineering, video game programming, chemistry and environmental science. At UNT, women studying STEM subjects find success through research opportunities, challenging classes and leadership roles in student organizations.

Years after watching Apollo 13 at home, Moreno would enroll in UNT's College of Engineering to study computer engineering and lead a team of fellow students in a successful NASA design challenge. The team designed a system that will make space feel more like home for astronauts.

"Here on Earth, humans generally wake up to the sunrise and begin winding down to the sunset," Moreno says. "That system helps us feel awake and perform at our best. We designed a lighting system where astronauts can input a schedule for sleep, naps and work time, and their spacecraft's lights will reflect the earth's sunrise, daylight and sunset. It's really important to keep astronauts at their peak performance, and our system helps with alertness and with some comfort from home."

As a result of their work, Moreno's team brought home several awards from the NASA design challenge, attended a dinner at Johnson Space Center in Houston, and even met Apollo 13 astronaut Fred Haise.

"It was really a once in a lifetime experience," Moreno says. "When I first enrolled in engineering classes, I was a little intimidated. I thought I would be the only girl in all of my classes, and on top of that the only Latino girl, and English wasn't my first language. But I'm so happy I took the opportunity to jump into my classes and the NASA project. I've become very confident in my ability to take on challenges. When you arm yourself with knowledge, you earn respect and you become more confident."

The College of Engineering is housed at UNT's 300-acre Discovery Park campus. Discovery Park is equipped with state-of-the-art labs and equipment, which provides UNT engineering students a unique environment to learn, conduct research and connect with peers and faculty mentors.

Courtney Dickson has always enjoyed the way video game programming gives her a chance to build new worlds and be creative. She enrolled in UNT's Department of Computer Science and Engineering, where she honed her programming skills in UNT's Laboratory for Recreational Computing.

"Game programming classes are challenging, but there's nothing to be afraid of," Dickson says. "We work in teams and focus on creating brand new games. If you stay focused you'll pull through."

In one of her classes, Dickson created a multi-level side scroller game – a format where the game's action is seen from a side-view angle – where players can shoot at enemies.

"Gaming is becoming more popular among women and more women are getting into the programming industry," Dickson says. "Today, women – including me – want to impact the way games are made and change the industry."

Computer Science and Engineering Professor Ian Parberry founded the laboratory in 1993 and has seen that shift reflected in his classes.

"The number of women enrolled in our game programming courses has more than doubled," Parberry says.

UNT offers a Certificate in Game Programming and has been named by GamePro magazine and The Princeton Review as one of the top institutions in North America to study game design.

Setting your own path

Jessica Beckham, a doctoral candidate in UNT's Department of Biology, was considering English as a major when she first began working on her bachelor's degree. It wasn't until she took biology courses that she decided she wanted to change directions.

"Interestingly, when I took my first biology courses I struggled a little bit. It wasn't until I enrolled in an upper division genetics course that I knew I wanted to go into biology," Beckham says. "It made me realize that it's OK if the first few courses are tough. It took some work, but I found out I was really interested in entomology and conservation."

Beckham has spent the last few years doing field work and researching Texas bumblebee populations. She has driven more than 3,000 miles across 16 Texas counties to examine various species of bumblebees in the field and to take DNA samples. Beckham's work received funding from a State Wildlife Grant from the Texas Parks and Wildlife Department, and her results show that urban greenspaces are providing important habitat for declining bumblebee species. Her DNA work will also provide a foundation of data for future researchers interested in monitoring Texas bumblebees.

Beckham encourages women who are interested in science to set their own path.

"There is an impression that if you go into science or engineering, having a life outside of work will be impossible. That isn't true," says Beckham, a mother who will have her second child in early 2016. "It's OK to have balance, and for me that started with letting go of the idea of perfection and comparing myself to others. That helped me become more confident in my choices and to find an education and research path that works for me."

Students in UNT's Department of Biology can explore areas including ecology and environmental science, biochemistry and molecular biology, developmental physiology and forensic science.

Texas Academy of Mathematics and Science

When Noelle Davis began looking into UNT's TAMS program, she saw opportunities to take courses that weren't available at her high school. Some of those courses have included linear algebra and differential equations.

"Having such a range of classes to take has really helped me determine my career interests," Davis says. "These are classes I wouldn't have been able to take otherwise."

UNT's TAMS program is the nation's first accelerated residential program for gifted high schoolers, allowing them to come to UNT to start their first two years of college early. Students in the program work directly with UNT faculty to conduct research in their fields of interest. Students also spend hundreds of hours each year doing community service, and join student organizations – such as the TAMS robotics group.

"I joined the TAMS robotics team and it has been a great experience," she says. "I learned a lot, but I wanted to know more. So, I reached out to friends who were doing research in UNT's Human Intelligence and Language Technologies Lab. I joined them and we worked on a project that aims to program robots to use a person's gaze to understand what the person is thinking."

Joining the research team and working in the lab gave Davis confidence, which she says is key to being successful in whatever field students choose.

"It can be intimidating to be around people who have more experience than you, but if you take initiative and learn more about a topic, you'll be more confident and you'll be able to do anything you set your mind to," she says.