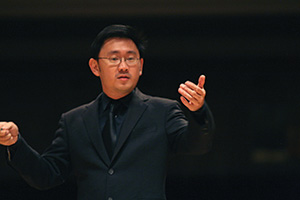 Jason Lim ('03 M.M.) won third place in two categories — Conducting-Professional Orchestra Division and Orchestral Performance-Professional — from The American Prize Conducting Competition this year. In 2011, he won the Young Conductor Citation Award. He submitted recordings from a concert by the Denton-based Odysseus Chamber Orchestra, which boasts 35 members and performs three concerts a year.

"The awards are a means of validating my struggles, hard work and determination," he says. "I feel that conducting as a profession is more than usual a profession based on luck, timing and connections."