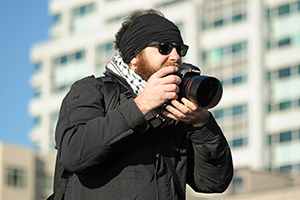 Planning ahead has always been important for freelance photojournalist Alex Garland ('06), who earned a degree in emergency management from UNT. However, when he boarded a plane to Thailand mid-January with a blank itinerary, he had nothing but a backpack of limited necessities, his Canon cameras and a desire to learn and share the truth.

"I heard conflicting reports about the political unrest," says Garland who had made a New Year's Resolution to take an international trip for photojournalism this year. "I knew this was my chance."

Garland spent four days documenting Thai citizens, young and old, as they gathered together and advocated for change. While many mentions of protesters and activists often conjure up notions of anger and hate, Garland's photos showed unity, patriotism and hope.

"Feeling strong enough about a cause to remove oneself from daily habits to join a crowd of like-minded people is an integral part of being human," says Garland. "A struggle against injustice, win or lose, starts with gatherings of like-minded friends, family members and neighbors. This is where real change begins."

Although Garland suspected he might run into violence, he says the protests were peaceful. He found the Thai people to be very kind and passionate about political reform.

"All of the people protesting in Thailand were smiling in his photos," says Diana Elrod ('00 Ph.D.), Garland's mother and director of UNT's McNair Scholars Program. "They appeared to be genuinely happy about what they were doing."

Garland lives in Seattle with his wife, Jessica Severance ('10), an actress who earned her degree from UNT's Department of Dance and Theatre. His photos have been published by media outlets, such as MSNBC, The Huffington Post, The Drudge Report, The Seattle Times, The Guardian, Time magazine online and the Daily Telegraph.

Elrod admits that she and her husband, Douglas Elrod ('98 Ph.D.), often worry about Garland when he is on his trips, but they're happy that he's found his bliss. He doesn't always have the luxury of communicating with loved ones while overseas, but he does his best to make sure his mother and step father know where he is at all times in case of emergency.

Garland developed a love for photography at a young age. When he was three or four years old, his grandmother gave him a camera. He went on vacation with his family to Greece, Italy and Turkey and put his skills to the test.

"His photos were just amazing," says Diana Elrod, who knew he had an eye for detail and enjoyed seeing the world through his camera lens.

Garland's interest in storytelling through photography accompanied his wanderlust, which inspired him to sell nearly all he owned and travel through Europe and Southeast Asia for a year after graduation. This was just the beginning of many more adventures. He explored various European countries and worked as an au pair for young children, went on his honeymoon in Peru, documented the rebuilding of houses in Haiti with a disaster relief group and volunteered in a Nepal orphanage. While many of his travels taught him new things, he says his life was changed forever when he volunteered at the orphanage in Nepal.

"Seeing the struggle people went through to live basic lives was very sobering," he says.  "It definitely influenced the way I think about life."

After taking some time to travel the world, Garland served the Federal Emergency Management Agency as a GIS analyst for several years and made maps for disasters and international crises, the first of which passed President Obama's desk during his first year in office. While Garland couldn't ignore his desire to be behind the camera, witnessing history unfold and visual storytelling, he says his work with FEMA helped him develop several key skill sets for photojournalism.

"Emergency management planted my focus on helping those in need face stressful situations," he says adding that the ability to meet deadlines, report with accuracy and strong communication skills also were traits he learned.

"Naturally, as a human, my empathy for one side or the other exists, but my desire to spread truthful, accurate information as an objective journalist, is at its highest point when I'm in those emotional situations," says Garland. "I find a sense of clarity and purpose when documenting the struggle of those in need, regardless of the situation -- peaceful or not."