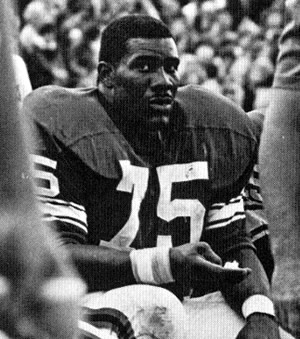 (Vote now for the Professional Moments category through Sept. 12.)

Voting in the sweepstakes’ Professional Moments category is ongoing through Sept. 12.

“While most regions plan two to three years to host a Super Bowl, it is our belief that North Texas has been laying the groundwork to stage XLV for 100 years,” says Bill Lively (’70 M.M.Ed.), UNT alumnus and president and CEO of the North Texas Super Bowl XLV Host Committee.

At a ceremony at Dallas’ Woodrow Wilson High School in January, the committee introduced its Century in the Making program by naming the 250 greatest football moments in the history of the North Texas region. The list was compiled by the Century in the Making Action Team, a blue-ribbon panel of local sports broadcasters and reporters.

In March, online voting for the Century in the Making sweepstakes began with fans asked to vote on their five best football moments in each of four categories to narrow the 250 moments down to the 100 greatest in the region’s history.

“This fall, we will reveal the results of the fan voting and name the 100 greatest moments to commemorate the first 100 years of football in North Texas. It really is an incredible way to start the build-up to the region’s first Super Bowl,” says Brad Sham, who chairs the Century in the Making Action Team and has served as the radio voice of the Cowboys for more than three decades. 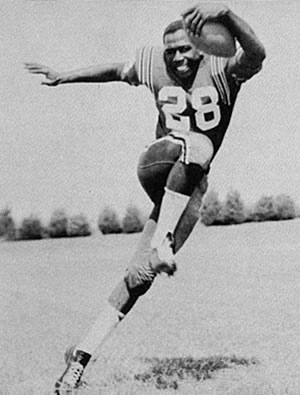 Moment 2/51
Sept. 25, 1960: Behind touchdowns by Curley Johnson and Johnny Robinson, the Dallas Texans defeat the Los Angeles Chargers, 17-0, before a crowd of 11,000 at the Cotton Bowl in the AFL’s first regular-season game in Dallas. The Texans’ roster includes Jim Swink, Abner Haynes and Jack Kemp.

Moment 6/51
Dec. 23, 1962: Dallas Texans defeat the Houston Oilers in 2OT to win the AFC. Abner Haynes scores on a touchdown run and a touchdown pass and Tommy Brooker kicks the game-winning field goal.

Moment 12/80
Sept. 17, 1956: The state of Texas officially becomes integrated athletically as college football breaks color barriers with the appearance of Abner Haynes and Leon King at North Texas State in Denton. Haynes and King get their start on the Mean Green’s freshman team, but quickly made the jump to varsity.

Moment 16/80
Dec. 21, 1960: Dallas Lincoln High School star Abner Haynes, who also played at North Texas State, is named the AFL’s Player of the Year, AFL All-Star and Rookie of the Year in the Dallas Texans’ inaugural season. Haynes dominates the AFL, leading the fledgling league in rushing yards and touchdowns and ranks among the Top 5 in receiving and punt/kickoff returns.

Moment 71/80
Dec. 19, 2004: G.A. Moore retires as Texas’ winningest high school coach ever with 404 wins. He spends 39 of his 42 seasons at Pilot Point, his alma mater where he won two state titles; and Celina, where he won six championships. In 2009, Moore comes out of retirement at 70 years old to be the head coach for Aubrey High School.

Moment 39/76
Nov. 2, 1968: North Texas State quarterback Steve Ramsey enjoys one of the biggest passing days in school history, throwing for 433 yards and five touchdowns in a 55-34 victory over the Cincinnati Bearcats in Denton. Ramsey sets three school records and repeatedly hooks up with future Pittsburgh Steelers’ receiver Ron Shanklin as the Mean Green win on Homecoming in a pouring rain.

Moment 46/76
Nov. 13, 1976: Bobby Bowden’s first team at Florida State has to convert a two-point conversion in the game’s final two minutes to steal a 21-20 victory over North Texas State in Denton. Dubbed the “Snow Bowl,” the game is played with six inches of snow covering the turf at Fouts Field.

Moment 69/76
Oct. 13, 2001: Winless North Texas shocks unbeaten Middle Tennessee State, 24-21, to begin its unlikely journey to its first bowl game in 42 years. The Eagles finish 5-6 and lose their last game, but still win the Sun Belt Conference and are awarded a bid to New Orleans where they get smashed by Colorado State.

Moment 70/76
Dec. 3, 2004: North Texas freshman running back Jamario Thomas leads the nation in rushing yards (1,801), averaging 180.1 yards per game and winning the Sun Belt Conference’s Player of the Year, Offensive Player of the Year, and Freshman of the Year awards. Thomas sets the NCAA freshman record for total number of 200-yard rushing games with five.

Moment 32/43
Dec. 23, 2004: Using the previous year’s loss in the championship game as motivational fuel, head coach Todd Dodge’s Southlake Carroll Dragons complete their season with a 16-0 record, state championship and USA Today’s mythical national championship as the No. 1 schoolboy team in the country. (One of several moments in the list from Dodge’s time at Southlake)

Nov. 24, 2006: Over 46,000 fans pack Texas Stadium for a classic Class 5A Area playoff game between undefeated defending champions and perennial local powerhouse programs Southlake Carroll and Euless Trinity. The teams trade leads before Carroll stops a fake-punt gamble late in the game and rallies for a 22-21 win when quarterback Riley Dodge scores on a run in the final minute.