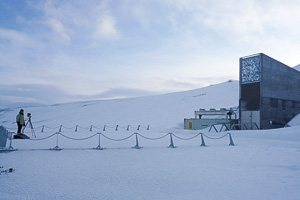 When photography professor Dornith Doherty journeyed to a remote Norwegian island this spring, just 800 miles from the North Pole, she became one of a select few to see inside the Svalbard Global Seed Vault.

Built into a frozen mountainside and opened only a few times a year, the vault secures the world’s seed collections from natural disaster or catastrophe. Doherty took photos of the vault as part of her faculty fellowship with UNT’s Institute for the Advancement of the Arts.

The fellowship has allowed her to continue work on her project, Archiving Eden, inspired by an article she read about the Svalbard vault’s opening in 2008. For the project, Doherty has used X-ray machines to photograph seeds and cloned plants at the National Center for Genetic Resources Preservation in Colorado and the Millennium Seed Bank in England. She then incorporates the images into digital collages.

The Svalbard vault did not have X-ray machines for her use, but she plans to use her documentary-style photos in a future book. Doherty says she is interested in the vault from a philosophical and cultural standpoint and is “captivated by the photographic process of collecting and making visible the inaccessible or invisible.” She also plans to photograph Argentina’s seed bank. Her work will be featured in a solo exhibit at the Encuentros Abiertos Photography Biennial in Buenos Aires in August.