When we posted a UNT Facebook request for couples who met on campus to send us their love stories for Valentine's Day, we got some great responses. Here are a few from alumni through the years. Go to facebook to see the complete thread.

He asked who she was though they'd already met 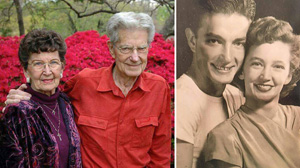 My grandparents, Gordon "Bardo" Tidmore ('50) and Lucy Lemon ('49), met and started dating at UNT in 1946. Lucy started school in 1945 and Gordon in 1946, when he got out of World War II. Lucy was voted college favorite in 1947 and was a Green Jacket. Bardo was on the football team, until he broke his leg. They met through a friend; however, Bardo did not remember meeting Lucy. At a football game, near the concession stand, Lucy said hi to him. He asked who she was and how she knew his name, got her number, and they were married 19 months later.

Lucy graduated with a B.A. in library service, and Bardo with a B.S. in business. They moved to Wichita Falls where Lucy was a librarian at Sheppard Air Force Base and Bardo worked at a car dealership, then to Vernon in 1961 where Lucy taught at an elementary school until she retired. Bardo owned his own car dealership in Vernon for 55 years. He passed away in 2012. One of their three daughters and two of their five grandchildren also graduated from UNT. They also have six great-grandchildren. Lucy still lives in Vernon but visits family often.

Bardo and Lucy were inseparable. The way they looked at each other, even after 64 years, was that of a couple truly in love. Their love was unconditional, undeniable and what everyone hopes for. Lucy says, "Life wasn't always easy, but it was easier with him, together."

My mom graduated from UNT and I have my bachelor's and master's, so it's definitely a family tradition over three generations! -- Jennifer Reynolds ('11, '13 M.S.)

A pimento cheese sandwich brought them together

My mom and dad, Mary Lou Ray ('48, '52 M.S.) and Fred McCain ('48, '49 M.S.), met at North Texas in the late '40s and graduated with their master's degrees from UNT. Mom was a member of the Theta Chis and dad the Talons. Mom sold dad a pimento cheese sandwich to raise money for the sorority, and he asked her out for a coke date. The other sorority sisters kept telling Mom, "Don't you know who that is?" And Mom had no idea he was the quarterback.

The rest was history. They married in 1949 and were married just shy of 65 years. Dad went on to have a successful career with UNT athletics. He did take the team to two bowl games as quarterback in 1946 and 1947, the Salad Bowl and Fiesta Bowl. They were true role models for me and my nephew (both UNT grads) with their love for each other and their love of the university and the ball players. Go Mean Green -- Karen Noel McCain ('78)

Married on the weekend, back in class on Monday

In 1970, I was attending North Texas on the GI Bill studying for an M.B.A. My future wife, Valeria Iglehart ('71), was an undergraduate student working to get a degree in education and her teaching certificate. We met on a blind date the spring of 1970. In March 1971, we went back to her hometown of Westbrook, Texas, for the weekend and got married. We both had to be back in class the following Monday so we didn't have the time or the money for a honeymoon.

We now have two grown children, Gary Cocke ('10) -- who also met his wife, Jamie Rucker Cocke ('08), at UNT -- and Sarah Cocke Goodwin, and three grandchildren. I am retired from Texas Instruments and Valeria is retired from the University of Texas at Dallas. -- William Cocke ('71 M.B.A.)

She couldn't get out of lunch

I met my husband, Michael, at The Syndicate in October 1989. I went to meet my roommate for lunch and she was tied up playing a match in a pool tournament. Another player came over to ask if I was the roommate and offered to take me to lunch. I tried multiple excuses to get out of the lunch but finally conceded to going to Mr. Chopsticks (off Fry Street at the time). Lunch turned into a few hours and by February we were dating. We married soon thereafter and are going on 26 years! -- Jacqueline Davis McCrady ('98)

He picked a flower for her

The Green Brigade brought us together. I met my husband, Kevin ('93), on the band bus to Austin in October 1992. I was in color guard and he played euphonium. He was supposed to be on a different bus but jumped on ours at the last minute and needed a place to sit. My friend Pam started everything in motion when she gave him the seat next to her and right in front of me.

The next day we were getting on the bus to head to rehearsal and a band mate walked in carrying flowers. I made the comment to my friend that nobody ever gives me flowers. My future husband overheard this, ran off the bus, picked a flower and brought it back to me. The rest of the trip he kept bringing me flowers and the last gift was a whole plant! We are celebrating our 18th anniversary this April and have so many fond memories of UNT! -- Stacey Roquemore ('95)

They liked Bowling For Soup 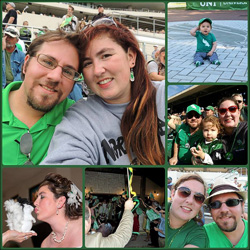 Sidney ('07) and I met at UNT via mutual friends at a house party back in 2005. While we didn't date in college, we were really good friends and enjoyed having lunch outings at Bari's, tailgating at UNT football games, pool club and the Bowling For Soup concert.

After we graduated we reconnected in 2008 and have been inseparable ever since! We got married in 2013 with our color scheme being UNT Green and yellow! We even had our very own albino squirrel statue that would roam around at our wedding, and we collected the UNT pompoms over several football seasons (being season ticket holders) so that we could use them as our good-bye exit from our wedding.

We now have our own handsome lil toddler who also bleeds green, we were fortunate enough to be able to bring him to this past bowl game, and he's even visited campus for a few photo shoots! We love UNT and we wouldn't have each other had we not both attended this wonderful university. #GoMeanGreen -- Cristina Kane-Latour ('08, '10)

They were engaged in Clark Park

My wife Ashlee Pate ('12) and I met in 2012 at UNT. We had a stats class together in the spring, and got to know each other in the business law class we had together that summer. After the class was over, we started dating. She proposed to me the following year in Clark Park, because when we first met we would take long walks around campus and this was an area we visited often.

We looked at venues to hold our wedding at, including UNT (since we both graduated from UNT), but since marriage equality had not come to Texas yet, we instead married in Hawaii. We have since moved to Colorado and love it here. -- Valerie Pate ('13)

Obsessed with the Mean Green 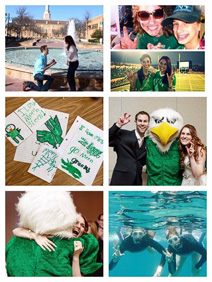 This month I received this cute little postcard from the University of North Texas inviting me to participate in a social media competition to "Spread the #UNTLove" and share my favorite Mean Green love story this Valentine's Day. Well ... y'all know I'm slightly obsessed with my Mean Green.

My experience is my love story. UNT shaped me into the person I am today and has an incredibly special place in my heart for so many reasons. For starters, it was the best place for me to grow into my own person and opened so many doors with so many opportunities. I met my best friends and sorority sisters for life there. Two years after my own graduation, my little sister Caroline Wright followed in my footsteps, and UNT became something that brought two sisters separated by six years that much closer.

My husband, Bradford, proposed to me at my favorite place on campus and my sister arranged for Scrappy to surprise us at our wedding reception. He stayed and danced, in true Scrappy fashion, for nearly two hours, and brought so much happiness to our already special day.

As a teacher, I spread the UNT love, and I adore when my students get as excited about the color green as me. Now that I live out of state, I'm especially excited when my Oklahoma kiddos show love for the Mean Green.

So I can't pinpoint one Mean Green "love story." I'm just forever grateful to UNT and so happy my most wonderful memories are entwined with my beloved Alma Mater. -- Courtney Zygmontowicz ('11), voted the winning story in the UNT Advancement contest

He caught the bus just in time 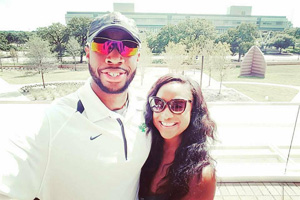 I met my now husband, J.T. Thompson ('09), at the bus stop in the Fouts Field parking lot, right outside of Traditions Hall. He was running late for class, and I was already on the bus (on time). He walked on to the bus, introduced himself and we became great friends. (The bus driver, Quentin Moore, is still a friend of ours to this day!)

We played intramural sports and took some of the same classes together. What started as a friendship, blossomed into "boyfriend and girlfriend" for nearly seven years. On Dec. 31, 2013, he proposed! We are now happily married. It was two years in February!! I love you baby!!!! -- Alysha Thompson ('10)