UNT experience inspires alumnus to give back 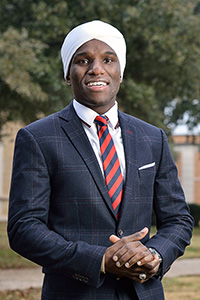 For years, David Wachira ('13 Ph.D.) harbored a very lofty goal: to work for the World Bank, an international organization that provides financial support and technical expertise to developing countries.

After earning a master's degree from Tarleton State University studying transparency and foreign aid, particularly in developing nations, the Kenya native came to UNT, because he was impressed by its public administration program. Within five years, he had earned his Ph.D. and landed the job of his dreams. Wachira was chosen from a pool of more than 8,000 candidates and, of the 36 new hires, he was one of few who did not have an Ivy League education.

Wachira says it was his experiences at UNT -- the scholarship support he received, mentoring from faculty, the rigorous curriculum, and the access to research and teaching opportunities -- that put his goal within reach. So, grateful for the opportunities he was given at the university, Wachira decided to donate proceeds from his first World Bank paycheck -- $4,000 -- to help other UNT public administration graduate students finish their studies.

"Without the scholarship I received at UNT, I wouldn't have been able to complete my studies," he says. "I wondered how many other people found themselves in that situation and were not as privileged or as lucky as I was. I decided I could do a small part to make sure someone else doesn't go through that, where they have the intellectual capacity and ambition but that the finances hindered them from accomplishing their goals for the future."

Robert Bland, professor and former chair of the Department of Public Administration, worked closely with Wachira during his time at UNT. He says Wachira's generosity allowed the public administration program to give four $1,000 scholarships to help doctoral students finish their degrees this academic year.

"I can't tell you how thankful those students were," Bland says. "David is a genuinely fine human being who really cares about others, particularly his fellow Ph.D. students."

That feeling of relief at securing funding for continued studies was familiar to Wachira. After coming to the United States from Kenya, he and his family settled in Troy, just south of Waco. Wachira's parents were supporting him and his two sisters as they all pursued higher education. He says the scholarship support he received at UNT made a tremendous impact.

"It made the difference between finishing and not finishing my degree," he says. "It was that breath of relief when I was able to tell my parents they could focus on the girls. I was able to help my family."

Wachira's decision to turn that gratitude into a gift to the university benefits not only the public administration program, but also the university as a whole, Bland says.

"Gifts like David's help us recruit quality students and, equally important, keep really good students on track so they can finish their Ph.D.s," he says. "Ph.D. programs are really where the university is able to sharpen its research reputation. Strong Ph.D. programs draw strong faculty and produce research that communicates the university's caliber."

Now Wachira is proving the strength of his UNT degree through his work with the World Bank, something he says wouldn't have been possible without the opportunities he received at UNT. He says all UNT students deserve those same opportunities, which makes a strong case for giving back.

"I would ask (alumni) to really consider the benefits their education has had, and not just monetary aspects, but the possibilities it opened, the fortunate experience to be able to graduate. There are people the world over dying for that particular opportunity," he says. "There is no reason to wait. It could be a $20 donation per month -- the amount of the contribution does not matter -- as long as an individual contributes. That is what causes change."

To make a gift to UNT, visit the Giving to UNT website.