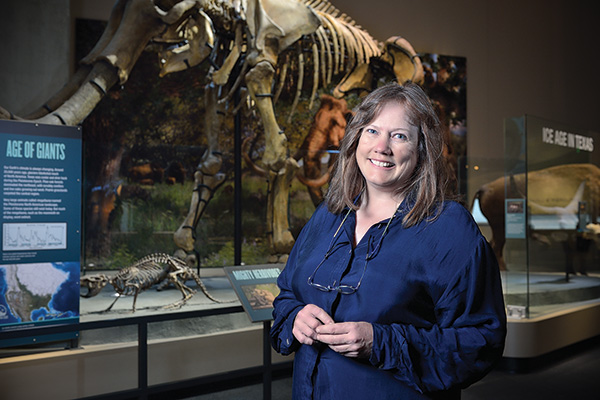 "I've seen polar bears in the wild, stood on a volcano, dug up dinosaurs, boated past hippos on the Nile, walked across the planet's oldest rocks, hiked in rainforests, and touched historic artifacts from Addis Ababa to Washington D.C.," she says.

Carr has digitally painted murals and illustrations for more than 100 museums worldwide — including 700 images on human origins for the Smithsonian National Museum of Natural History in Washington, D.C., five plant life murals for the Australian Museum and eight murals and 41 dinosaurs images for the newly opened Perot Museum of Nature and Science in Dallas.

Carr's career as a museum artist is a culmination of a lifelong dream.

Her father, Bill Carr, worked as an illustrator for the Fort Worth Children's Museum, now part of the Fort Worth Museum of Science and History and, as a child, Carr wandered through the exhibits when no one else was there.

"My favorite part of museums was getting to go back into the stacks," she says. "I liked to go back where people were working."

She transferred to UNT from the University of Texas because she was attracted to the art program, which had professionals teaching classes and internships available for students. She worked in Fine Line Graphics, a student-run professional design firm.

She says the university "was full of wonderful instructors" and especially remembers David Blow, Professor Emeritus of communication design.

"He really was a great teacher — very low key but lots of fun and informative," she says. "He made me very comfortable that I had made the right decision to transfer and gave me what I needed to hit the ground running."

She also met her husband, Ralph Gauer Jr. ('83), a dormmate in Bruce Hall. 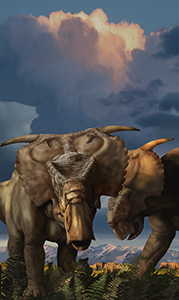 "It was a community," she says. "And one of the best times of my life."

After earning her bachelor's in art, Carr went into design, but didn't like it. She started pursuing work for museums.

She landed her first project in 1990 with the Dallas Zoo, creating a mural in the tunnel that divides the two sections of the zoo. Work for other museums followed and her reputation grew.

Often, Carr creates entire halls in museums. She is currently working on projects in the Alabama Archives, Discovery Center of America in Tennessee and the visitor's center for Florissant Fossil Beds National Monument in Colorado. She also serves as the 2013 Artist in Residence at the Denali National Park in Alaska, where she will produce a mural for the park and spend two weeks lecturing and visiting the park. Her work begins on the computer, where she creates the model using Corel Painter to create the murals. Later she paints the textures.

"Think of it like sculpting a sabertooth cat and then painting all the detail in," she says. "The machine is just another paint brush. It doesn't do anything for you. That's the toughest thing to teach people. It takes hours and hours to make an image like this and — unfortunately — there's not a 'sabertooth cat button' you can press on your computer keyboard!" 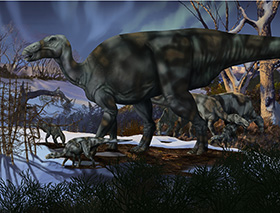 Her interest in science also comes from her family. Her mother was a biologist who often took her on her research trips. Carr also reads many books at the beginning of her art projects.

The artworks require many revisions and communication between Carr and the scientists.

"Each client has a message they want to convey, but often they can't visualize or describe it clearly," Carr says. "I need to give them options for presenting their vision to the public. And it has to be coordinated with the rest of their team, the designer and the fabricators. It's all puzzle solving and that's the most satisfying aspect." 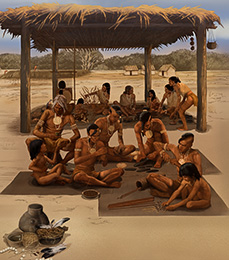 One archaeologist told Carr that she was able to see the pictures that were in their heads.

"That made me incredibly happy," she says.