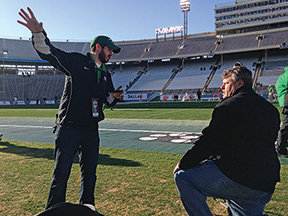 The Mean Green football team's winning 2013-14 season led to another victory -- this time, for Ashton Campbell ('03), executive producer of the Fox Sports Southwest series Beyond the Green.

The series, which took a behind-the-scenes look at the team and its season, was a finalist for the Outstanding Program Series award from the Sports Video Group and the National Association of Collegiate Directors of Athletics. An episode about defensive end Brandon "Sarge" McCoy ('13) received the Outstanding Feature award.

"The really fun thing about doing the series was being able to cover my school," says Campbell, who majored in radio, television and film. "That was a really unique part of it -- to be able to watch the team that I love."

Watch the winning series, which Campbell is continuing for the 2014 season. >>