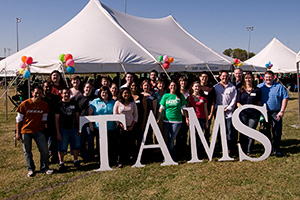 For a quarter of a century, thousands of Texas' best and brightest high school students have enrolled in the Texas Academy of Mathematics and Science program at UNT.

The Texas Legislature voted to create the academy in 1987 to provide gifted Texas high school students with an opportunity to complete their first two years of college while earning a high school diploma. At the time, TAMS was the nation's first residential program for gifted teenage math and science students.

Since that first class, nearly 4,000 students have graduated from TAMS and have gone on to impact fields including medicine, engineering, law and even the fine arts.

"What is so exciting about reaching this milestone is imagining what will happen in the next 25 years," says Richard Sinclair, TAMS dean. "Our 4,000 graduates will be mature and productive leaders and innovators in science. I am often asked if a TAMS graduate has won a Nobel Prize. 'Just wait' is my response." 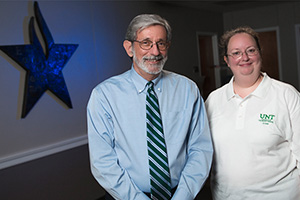 "I'd done well on the PSAT and my guidance counselor gave me a brochure," Vann says. "I decided I wanted to give it a try, so I applied and was accepted."

In Fall 1988, Sharon became a member of the first class of TAMS students. Today, she serves as the academy's college advisor.

"That first year we all lived on the third floor of McConnell Hall," Vann says. "Outside of classes, we worked on creating the first TAMS student organizations and events. We also had a seminar program through which UNT faculty would stop by to talk to us about their research and classes."

The first TAMS class also instilled a tradition of community outreach in the program. 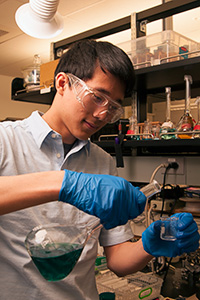 "We organized an Easter egg hunt for children of UNT faculty -- with the Easter bunny and everything -- over on the Advancement Center lawn, which is where the Gateway Center is now," she says. "We set up a Halloween haunted house in the residence hall for local children, too. That spirit is still there. TAMS students today go out and do all kinds of community service, including tutoring elementary school children, working in community gardens and helping the elderly."

Dr. Ryan Shaun Joazeiro de Baker ('96 TAMS), a graduate from the program is now an associate professor of cognitive studies in education at Columbia University. Baker credits TAMS with giving him a head start on his career.

"For me, going through TAMS meant I got two more productive years as a scientist early in my career," he says. "I got involved in research while I was in TAMS and learned a ton. The program helped me become well prepared, and gave me a more enriched college experience than I would have had otherwise."

Sarah Worthy ('96 TAMS), also is a graduate from the TAMS program. Today, she is chief experience officer and director of product for AuthorizedCV, a Houston-based health information technology startup founded by two aerospace flight surgeons. Worthy is passionate about technology and the web.

"My career wouldn't exist without the Internet," Worthy says. "As a software product manager, I work in the cloud to manage web application design, development and hosting projects, and collect and analyze large amounts of data from clients and their users. During my time as a student in the TAMS program, the Internet was just coming out. And, because of TAMS, I had opportunities to study the web with UNT researchers. It's an opportunity and a perspective I never would have had otherwise, and it really helped push my career to where it is today."

In late 2012, members of the TAMS administration began packing their offices for a move from Marquis Hall to Sage Hall. In the process, several pieces of academy history were found, and will soon be digitized and available for public viewing on the UNT Digital Library, which currently features the first 20 years of TAMS yearbooks. Physical copies of photos, scrapbooks and other materials will be housed in the Special Collections Department in Willis Library.

"The move to Sage Hall was really fortunate for us because as everyone was going through their old filing cabinets and clearing out old items, we found photos, documents, letters and so many pieces of history," says Alison Chapman, who manages alumni relations for TAMS. "We even found a huge scrapbook from one of the first classes." 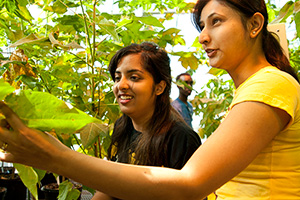 Chapman organized the documents in a historic timeline, and curated the entire collection. The TAMS digital archives will include documents relating to the academy's founding and establishment. One of the earliest documents is from 1986, and is a proposal paper by Jim Miller, former dean of UNT's College of Arts and Sciences.

"We found his original proposal paper that outlined the idea for creating a school like TAMS at UNT," Chapman says. "It's so interesting to see how it all came together. We also found papers documenting the process of proposing and passing HB 2079, the Texas Legislature bill that created the academy."

The late Alfred Hurley was UNT's president when the academy was formally established.

"Anyone with an interest in UNT history, Texas history or education will have a great time looking through these archives," Chapman says. "TAMS was the first program of its kind to take these gifted young people and bring them to a college campus. It was considered a bit of an experiment when it first started, but over the past 25 years, with the success we've seen of our students and graduates, we know it was a great decision."