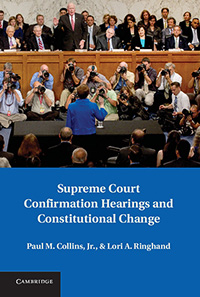 Paul M. Collins Jr., associate professor of political science, and Lori Ringhand, a law professor at the University of Georgia, were frustrated by how the media and academia portrayed confirmation hearings for the highest judicial office in the U.S. as empty rituals. They use historical and statistical methods to challenge that view in Supreme Court Confirmation Hearings and Constitutional Change (Cambridge University Press).

"The hearings are an important democratic check on the discretion inevitably exercised by Supreme Court justices," Collins says. "Through the hearings, the people are able — over the long run — to influence the constitutional choices made by the court."