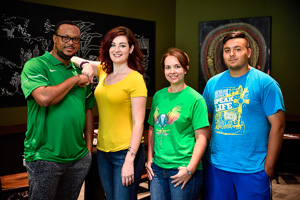 Uriel Onye, a doctoral student in information science, remembers his first 20-page assignment at UNT. He leaned over to another student to ask where he could find someone to type up his written draft – a standard procedure in his home of Igboland, Nigeria. The woman was confused. Onye, a graduate research assistant, soon realized he'd have to teach himself to type to meet the two-week deadline.

That's when he got his first culture shock

"It was the first time that my imagination would confront reality," said Onye, 37, a married father of three. "We all have a picture of America before we come here, and it can be difficult to grasp that how you did things at home would no longer suffice. You're expected to know what you don't know."

Like many UNT students, Onye found the obstacles life can bring – like teaching yourself to type in a matter of days – to be one of numerous stumbling blocks to push through in order to thrive in the classroom. It's a challenge students like Onye are able to meet, thanks in part to engaged faculty and staff members who care about student success, campus resources like the UNT Libraries and extracurricular activities like student organizations. Coupled with a collective spirit of tenacity and a go-getter attitude that many of the nearly 38,000 enrolled students embody, students are poised to excel.

"Support is critical," Onye says, adding that he would not have grown as much without the UNT community and its support systems as the backbone to his education.

Ginny Wheeler can relate. Considering herself a "late bloomer," Wheeler began dancing at the age of 17

She worked while attending community college before transferring to a four-year university. However, she decided it wasn't for her and quit to enter the workforce. Four years would pass before she returned to school to pursue an old passion: dance

At UNT, she found a boldness that she lacked before. At 5'11," Wheeler says she doesn't fit the stereotypical standard of a dancer, but she believes UNT gives her the confidence to take on the real world.

"I've had studio teachers and dance teachers from other schools tell me that I'm too heavy or not capable because of my size," Wheeler, 26, says, noting that things were different at UNT. "UNT just felt like home."

Though she was able to reconnect to her love of dance, she struggled with coursework.

"Before college, I was homeschooled and the environment was more relaxed," says Ginny, who found her early education to be slow paced. "When I came to UNT all that changed because of the help that I've found here."

She attributes her academic accomplishments to the availability of tutors, writing labs and professors at UNT who helped her transition from a laidback learning environment to a more rigorous academic atmosphere and competitive dance scene

Making the Mean Green a home

Jesus Reyes' experience was much different. Reyes, a 19-year old sophomore, came to UNT from Nixon, Texas. The town's population of 2,439 was smaller than UNT's 2015-16 freshman class. Reyes was initially ecstatic to start college away from home, but days after his arrival, he got homesick. Feeling lonely, he phoned his family almost daily.

Knowing he would need to step outside his comfort zone, he threw himself into organizations like the Family Business Association, UNT's chapter of the League of United Latin American Citizens, and Informs, a group for decision science majors. His campus involvement and leadership roles with the groups helped him meet new friends at his UNT home.

Also helpful were faculty like Jerry Dake, who believed in Reyes and encouraged him to reapply for a scholarship specifically for Hispanic students. The second time was a charm.

Reyes hopes to pay that Mean Green spirit forward. Most recently, he recruited his cousin Omar Muñoz to join him at UNT in this fall.

"Throughout the year, I've been telling him about my experiences and the things I've been doing," says Reyes, who drove in with his cousin days before the start of the fall semester, just in time for this year's Mean Green Fling. "We're pretty close, so it will be fun having my cousin around."

Reyes isn't the only one recruiting for the Mean Green family. Tosha Griggs, a mother of two, applied to UNT in hopes that she could attend college with her sister, Jasmine Thompson. When Thompson, a sophomore, transferred to UNT from North Central Texas College, Griggs followed suit. During Griggs' first semester, the pair were in a class together.

"I love the fact that she is going back to school now because it shows that not everyone has to go the traditional path from high school to college," says Thompson, who is 12 years Griggs' junior. "Everyone has a different, special path in life and I think she's a great example of that."

Being near family is a welcome change for Griggs, 34, who as a teenager had an unstable home environment and was responsible for herself at a young age.

She says she joined the Army in her early 20s "to start over." Griggs completed a tour in Baghdad for a year and developed Post-Traumatic Stress Disorder, which occurs in some individuals who have experienced emotionally painful and distressed situations.

"I've been on the ugly side of PTSD and of mental health illness and I made it through," says Griggs, a senior studying psychology. "I want to help others like me because I believe in counseling. I know that it works."

Griggs is also in UNT's McNair Scholars Program, which she applied to after encouragement from Sharon Jenkins, William Moen and Mark Vosvick. The federally funded program has been a big motivator for Griggs, who adds that McNair helps her focus on an action plan to eventually complete her doctorate and provides support for her research.

Griggs is also a research assistant at the UNT Center for Psychosocial Health Research. She says her two children have visited classes and sat with her while she's studied at the university.

Griggs' resolve has helped her thrive on campus. However, the support of the UNT community, and her longtime boyfriend, Corey Biggs, a 2012 political science graduate, has also been invaluable.

"Being at UNT was a dream come true," says Griggs. She adds that she knows the UNT support system – faculty, staff and fellow students – will be there to help.

Onye, the student who taught himself to type, agrees that the UNT community can be a huge catalyst for success

"Dr. Yunfei Du, my supervisor, and Dr. Shawne Miksa have been instrumental in helping me adjust to the program. They were open to hearing the challenges that I faced when I started my program," he continues.

After Onye defends his dissertation next spring, he'll pack up his family and return to his birthplace "to take what he's learned in America."

However, reflecting on a Nigerian proverb that "a fowl does not forget who cut the feathers during the rainy season," Onye says he won't forget the professors who helped him adjust when he felt the odds were against him.

Gabrielle Ebron contributed to this piece.

Video: UNT team aims to reduce waste at soup kitchen and beyond