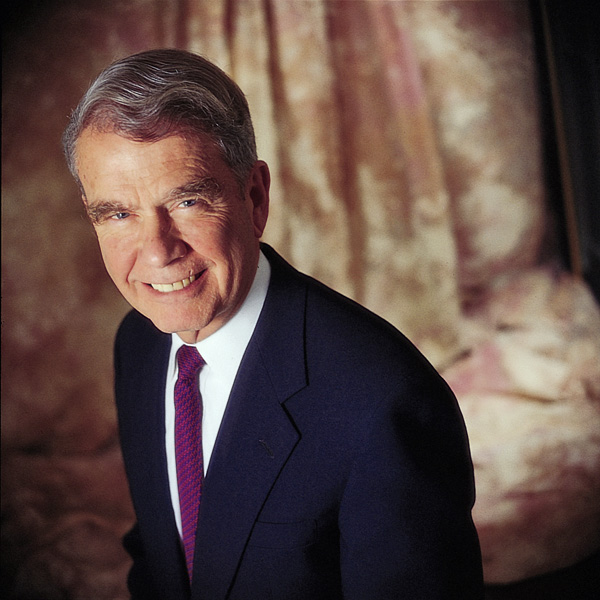 Alfred Francis Hurley, who was chancellor of the UNT System from 1982 to 2002 and also president of UNT until 2000, passed away June 8 in Dallas. Prior to coming to UNT, he had a distinguished 30-year career in the U.S. Air Force, retiring as a Brigadier General. He was 84 years old.

Hurley will be buried on Friday, June 14. There will be a Catholic Mass at 10 a.m. at the Air Force Academy Chapel in Colorado, followed by a military funeral and a reception at Doolittle Hall. The UNT community is honoring Hurley with a time of quiet reflection at Goolsby Chapel from 8 a.m. to 2:30 p.m. weekdays through June 14, where the community also can express written condolences to his family. The condolence book will be available at the President’s Office after June 14. And there will be a memorial service in Dallas to celebrate his life at a date to be announced.

Hurley was a warm and loving father and a devoted husband who shared a love of stories, adventure and social events with his wife Johanna, an educator who traveled the world as a Pan Am stewardess the year before they married. He also was a great mentor to his children and took great pride in their educational, professional and personal achievements. He was a fitness advocate who ran at least three miles a day. Hurley considered himself a New Yorker, yet he loved his and his wife's adopted state of Texas. He and his wife had celebrated their 60th wedding anniversary in January.

Hurley was born Oct. 16, 1928, in Brooklyn, New York, to Patrick and Margaret Hurley, both Irish immigrants. He was the oldest of four children. Survivors include: his wife and partner, Johanna Leahy Hurley; his brother, William; and the couple's five children, Alfred Jr., Thomas, Mark, Claire and John; as well as 14 grandchildren. His parents; his brother, John; and sister, Jeanne, predeceased him.

A champion for UNT and the UNT System

Read others' condolences or leave your own thoughts about Dr. Hurley below.

Growth was the hallmark of Hurley’s tenure at UNT, which started in 1980 and ended in 2002. The UNT System, which includes UNT and the UNT Health Science Center, rose to educational leadership in the North Texas region. Enrollment at the university increased from less than 19,000 to more than 27,000 students. The university’s endowment grew from $850,000 to $45 million, and nearly $200 million was raised across two capital campaigns. More than $260 million was invested in renovations and new construction. The increased stature of the university was signified by the change in 1988 of the university’s name from North Texas State University to the University of North Texas. In January 2001, the UNT System was recognized by the Texas Legislature as a formal system, making it one of the six recognized higher education systems in the state.

Throughout his careers at UNT and in the Air Force, Hurley highlighted the crucial role played by his full-time partner and wife, Johanna. As a tribute to their accomplishments, the UNT System Board of Regents named the administration building, which stands at the center of the campus in Denton, the “Alfred F. and Johanna H. Hurley Administration Building.” The citation accompanying the ceremony naming the building pointed to a Dallas Morning News editorial spotlighting Hurley as an “unsung hero of higher education.”

In addition to these accomplishments, the citation highlighted the nationwide recognition of many of UNT’s academic programs; creation of the UNT Office of Postgraduate Fellowships; establishment of UNT’s Texas Academy of Mathematics and Science; transformation of the Texas College of Osteopathic Medicine into the UNT Health Science Center at Fort Worth; and creation of the UNT System Center at Dallas, including creation by statute, of UNT at Dallas – the first public university within the Dallas city limits. The Regents also recognized Hurley’s accomplishments with the title of Chancellor Emeritus and President Emeritus.

Hurley was the first resident of Denton to chair the North Texas Commission and to join the Dallas Citizens Council. Other service included his serving as co-chair of the Coalition of Urban Metropolitan Universities (CUMU) and on its executive committee; president, Texas Philosophical Society; director, Fort Worth and Denton Chambers of Commerce; vice chairman, Denton County Business Leaders Council; president, Denton County United Way; chairman, (Texas) Council of Public University Presidents and Chancellors; and director, Association of Texas Colleges and Universities. He received the Otis Fowler Award from the Denton Chamber of Commerce in 1986.

After he retired as chancellor, Hurley became a professor in UNT’s Department of History from 2003 to 2008. In addition to teaching courses to undergraduate and graduate students, he and his wife continued to play a key role in organizing UNT’s annual Military History seminar, which enabled business and community leaders throughout Texas to hear various discussion topics and question both a leading scholar and a current or retired military officer who had served in combat. At its 23rd anniversary in 2006, the seminar was endowed by many of its participants and named the Alfred and Johanna Hurley Military History Seminar.

Hurley enjoyed a similarly distinguished Air Force career.  He enlisted as an airman two weeks before the outbreak of Korean War in 1950 and retired as a Brigadier General in 1980. From 1966 to 1980, he was permanent professor and head of the Department of History at the U.S. Air Force Academy, as well as a member of the Academy’s executive board and chairman of the Humanities Division from 1977 to 1980. Prior to his appointment as a permanent professor by President Lyndon B. Johnson, Hurley was one of the three youngest lieutenant colonels in the Air Force and had served in assignments as a navigator (achieving distinction as a master navigator with 3,630 hours), planner, administrator and educator in Texas, North Carolina, Colorado, Germany, Washington D.C. and Vietnam. He was the navigator on 70 reconnaissance missions while stationed in Germany during the height of the Cold War in 1963 and 1964. In the summer of 1968, he served a tour of duty in Vietnam, where he flew missions and worked on the EC-47 program. This program, which he conceived and organized, produced 100 histories of the air war in Vietnam, researched and written on the scene.

As permanent professor and head of the Department of History at the Air Force Academy, Hurley built a nationally regarded history department. He took great pride both in teaching cadets and recruiting and mentoring the officers who served in the department. Many of the cadets and officers went on to have distinguished careers themselves, including General Ronald R. Fogelman, the 16th Chief of Staff of the Air Force. Hurley enhanced the national academic profile of the department by initiating and hosting eight Military History Symposia, which brought together leading scholars in the field from the U.S. and Europe. He and members of his department also often lectured at the U.S. War and Navy War Colleges, as well as various Air Force service schools.

Hurley graduated summa cum laude from St. John’s University in 1950 and received its President's medal in 1990. While serving in the Air Force, he received a master’s degree and a Ph.D in history at Princeton University in preparation for his initial assignment to teach at the Air Force Academy from 1958 to 1963.  During his first tour at the Academy, he expanded his Ph.D. dissertation, Billy Mitchell Crusader for Airpower. Initially, published in 1964 and revised in 1975, his book is still considered to be the definitive scholarly treatment of the topic and was reissued by Indiana University Press in 2006.  He also wrote numerous articles and reviews for books and other scholarly publications.

Throughout both of his careers, Hurley had the reputation of not only using his own talents to the maximum, but also inspiring exceptional enthusiasm in others to do the same. The officers in his history department at the Academy presented him with a picture of a desk overflowing with work that said “Where the action is” and signed it “We do the work of 500 men.”

Hurley equally loved his time at UNT and was extraordinarily committed to the university. It was the job he had always dreamed of and found his experience in the military (and in particular at the Air Force Academy) as ideal preparation for it. On multiple occasions, he was approached regarding becoming president or chancellor of other institutions. However, he declined to even consider them. At one point in his tenure, the UNT System Board of Regents demanded that he accept a pay raise, though the institution lacked the funds for a more broadly shared increase in faculty pay. Hurley’s response was to donate the incremental compensation that he received back to UNT to fund scholarships for deserving students.

In lieu of flowers, the family requests that contributions be made to one of the following organizations: the Alzheimer’s Disease Center at the University of Texas Southwestern Medical Center, Falcon Foundation or the Alfred and Johanna Military History Seminar at UNT.