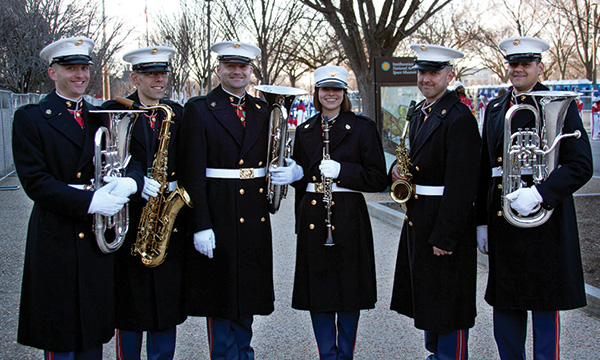 As members of the U.S. Marine Band, also known as the "The President's Own," they were among the UNT alumni sitting in the stands.

"The biggest memory is just the number of people in attendance," says Jenkins, a euphonium player who joined the band in 2002. "It's the republic choosing its next leader. It was a great ceremony."

Kawaller, a clarinetist who joined the band last year, felt more overwhelmed when she marched by the reviewing stand during the parade. A colleague warned her it would be like walking on Mars.

"You see thousands of flashes going off," she says. "It took everything within me not to look over at the president."

Both musicians say the faculty at UNT helped them land positions in the prestigious band. They played in the Wind Symphony under conductor Eugene Corporon, director of wind studies and Regents Professor of music.

Kawaller learned from her weekly sessions with John Scott, professor of music in clarinet. Jenkins worked with Brian Bowman, Regents Professor of music, who has led dozens of alumni into military band jobs that require a rigorous audition process.

"Thanks to the education I received from both Dr. Bowman and Professor Corporon, I knew what to expect when I auditioned for the band," Jenkins says. "Their training helped me to feel comfortable with the many aspects of this job and the high level of musicianship that's required."

The U.S. Marine Band provides all the music for the White House, and so regularly performs at big events — such as arrival ceremonies for visiting dignitaries — or in ensembles for smaller parties.

"You get to see history being made," Jenkins says, "and it never gets old."