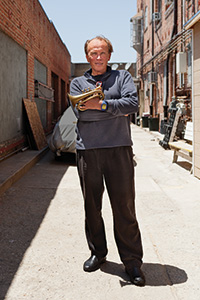 Advice for students pursuing their dreams:
Tenacity is the key to everything. You can learn what you don't know through education, but persistence is needed to obtain your goals. But, you must write those goals and their due date down. Then read them every day.

Time as a musician in college:
It was a great time to be at North Texas, where there was a music epicenter. It was the '60s — there was a social revolution and music was on the cutting edge of all the arts, whether film, literature, dance or theatre. Music led the way. Not just rock 'n' roll, but jazz, classical, gospel, folk, funk, all types of music. The social revolution of the '60s didn't just affect politics, race, gender and war, it moved everything in the arts as well.

Favorite sci-fi movies and TV shows:
I like best the older classics, like Robert Wise's The Day the Earth Stood Still (1951), Stanley Kramer's On the Beach (1959), based on Nevil Shute's  book about a post-apocalyptic world dealing with survivors reaching out to find others, and the old Twilight Zone episodes. But you cannot disregard Stanley Kubrick's 2001 or the work of Spielberg or J.J. Abrams who have made great classics (Close Encounters and Star Trek) in the genre as well.

On stage acting:
I don't know if I'm ever going to act on stage again. I sold my New York City apartment a couple of years ago. I'm a man of LA now. In addition to acting, I'm directing more now. I enjoy that.

Advice from your father:
He was very philosophical about my career choice and told me, "To do what you do, you need an even stronger sense of discipline than I do. You don't have to answer to a boss every day so you have to get out of bed and make your own work out of your own time."

On being a father:
For one, I can't watch any "heart-heavy" movies. I was watching The Curious Case of Benjamin Button and I cried for hours. There were so many beautiful reminiscences about personal journey. Having my son has made me feel more vulnerable. When you get your first "daddy hug," you never look back, baby!