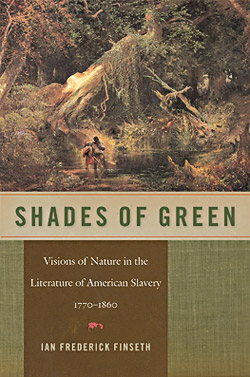 During the century before the Civil War, American authors attempting to mobilize public opinion against slavery or to redefine racial identity increasingly wrote of the natural world in scientific, artistic and spiritual terms. Ian Finseth, assistant professor of English, examines the relationship of racial thought to natural science and natural imagery in his new book, Shades of Green: Visions of Nature in the Literature of American Slavery, 1770-1860 (University of Georgia Press). Arguing that an understanding of race in early American literature must take the natural world into account, he includes examples from writers such as Ralph Waldo Emerson, Harriet Beecher Stowe and Frederick Douglass.