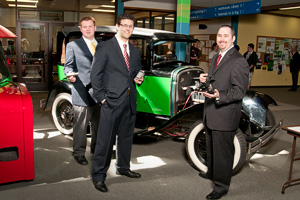 UNT’s Mean Green Machine, a 1931 Model A donated by alumnus Rex Cauble (ʼ74) in 1974, recently got a makeover thanks to a team of engineering technology students.

The team led by senior Brent Elliott worked for two semesters to convert the car, which had fallen into disrepair in recent years, to an electric vehicle. The UNT Student Activities Department brought the idea to the Department of Engineering Technology, and Elliott and his five teammates agreed to tackle the assignment for their senior design project. Student Activities provided $6,500 for the conversion, and the team was able to finish the project slightly under budget.

“I think we all underestimated what it would take to turn this car into a truly ‘green’ machine. There were times along the way that I wished we would have chosen an easier project, but seeing the end product made it all worthwhile,” Elliott says.

The team installed a NetGain Warp9 motor and a lead acid battery pack, and says the classic car will be able to exceed speeds of 30 miles an hour and have a range of about 30 miles. The team also made sure that the conversion was 100 percent restorable by building special mounts for the new components that could be easily removed without damaging the integrity of the car. During the final weeks of the project Elliott says the team was working 40 plus hours a week on the project, and though the project was challenging, the experience was one that he wouldn’t trade for anything. 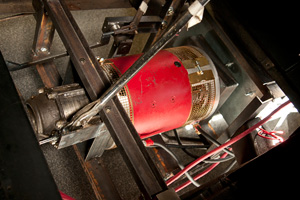 “We are mechanical engineers, not auto mechanics, so there were a few bumps along the way. Vehicles were built differently in the 1930s, so we had to do a lot of troubleshooting, but we learned a lot,” he says.

The car still needs a few more repairs before it’s back to cruising around Denton, but the Talons hope to have it fully operational by fall. The Talons Cannon Crew drives the Mean Green Machine at home football games, parades and other special occasions to promote UNT spirit.

The Mean Green Machine was last updated in 2007, when Michael Maher, then president of Talons, was determined to rebuild the Model A using only original Ford parts with help from Snyders Antique Auto. At that time, new upholstery was added and a brand new two-tone paint job displaying the North Texas spirit marks.

UNT's Mean Greens Café, the first all-vegan dining hall in the nation, has installed a hydroponic garden -- the first of more to come -- built into a specially designed refurbished freight...

A student challenge to design a solution to improve sustainability in a community, using data visualizations and social media, led to Andrew Miller ('11,'14 M.S.) and Thomas Wild's...