Urban Decay founding partner Wende Zomnir (’89) discusses how she shook up the beauty industry with the kind of fearless self-expression that never goes out of style.

rom a stage in the Union ballroom accented with Mean Green and her trademark purple — the color that has come to embody her company’s bold, enigmatic brand — Wende Zomnir (’89), a journalism alumna and founding partner of Urban Decay Cosmetics, dispensed her unique brand of charmingly no-nonsense, industry-disrupting wisdom to a packed house as part of UNT’s President’s Lecture Series on Oct. 17.

Zomnir’s avant-garde approach to the beauty industry was the evening’s focus, as she described how, 23 years ago, she co-founded and launched a line of cosmetics in wildly different, highly pigmented colors, crafting the cutting-edge makeup in her Laguna Beach bungalow. 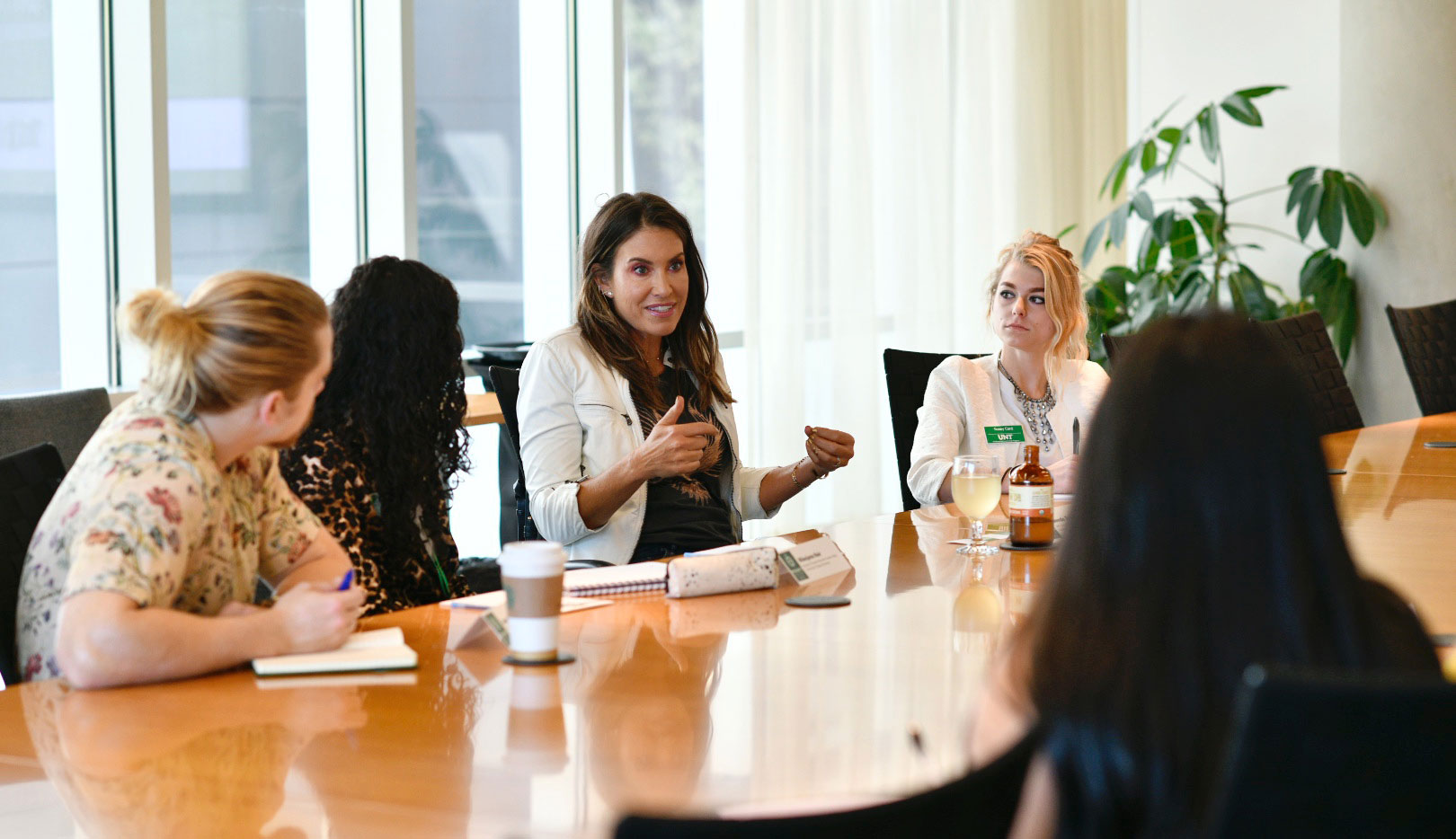 Wende Zomnir ('89), a founding partner of Urban Decay Cosmetics and a UNT journalism alumna, spent Friday, Oct. 18, visiting with classes on the UNT campus to discuss creativity and entrepreneurship. She also took part in the coin toss Oct. 19 in the game between UNT and Middle Tennessee.

“I had no prior experience in the cosmetics industry,” Zomnir said, pointing out that today Urban Decay is sold in 60 countries and exceeded one billion dollars in retail sales by 2016, the same year it became the No. 2 makeup brand in the U.S. “But I used what I learned at UNT and at work [in the advertising industry] to make it happen.”

That’s why, she said, she was so excited to speak in front of the next generation of disruptors and changemakers, while also reminding the audience that empathy and giving are equally important qualities.

“While we clearly embrace the makeup business with our wallets, it hasn’t always embraced us and our uniqueness,” she said, noting that until recently, makeup wasn’t about self-expression, but unattainable ideas. “We weren’t pretty enough, white enough, skinny enough or feminine enough. But those days are over.”

And that’s largely due to Zomnir’s groundbreaking, outsider perspective on what beauty should be. In 1996, Urban Decay — whose name was born from the idea that there is beauty in everything, even crumbling brick walls and rusty fire escapes — launched with 12 nail polishes and 10 lipsticks in unusual colors and with provocative names. The best part of steering the company through its meteoric rise, she said, was that “a bunch of renegades, weirdos and outsiders made the industry come along for the ride.” The brand touched a cultural nerve with Gen Xers and continues to do so with the status-quo-challenging Gen Z.

“Our original stated mission was to create makeup for girls and boys who want to rattle the notion of what beauty is and show the world who they are,” said Zomnir, who sported a rhinestone-encrusted diving Eagle pin during the event. “That authenticity resonated with people.”

She also talked about tapping into the burgeoning “girl power” mindset of the 1990s, the precursor to today’s empowerment movements, and Urban Decay’s goal of matching its brand philosophy to its products. Part of that mission includes its cruelty-free approach, as well as a fund the company launched in 2015 called “The Ultraviolet Edge,” which supports a variety of organizations that empower women through microloans, literacy programs, shelters and legal services. One of its most important partners, Zomnir said, is the Women’s Global Empowerment Fund, which helps women in Gulu, Uganda, make dramatic changes to their circumstances.

“It’s exciting when beauty can transform more than what’s on the surface, going deeper to help transform lives,” Zomnir said, imparting her final pieces of advice for the evening, which was followed up by a moderated Q&A with UNT President Neal Smatresk and questions from the audience. “Nurture your own revolutionary point of view, because even if you don’t realize it yet, you are going to change the world.”