The legacy of Anshel Brusilow 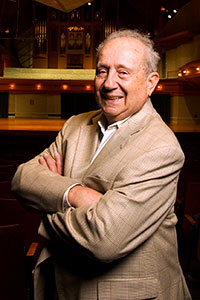 He was born in Philadelphia, the son of Russian-Jewish immigrants who passed their love of music on to him. He began his study of violin at age 5 with William Happich and would walk to lessons with his father.

Brusilow entered the Curtis Institute of Music in Philadelphia at age 11 as a student of the world-famous violinist Efrem Zimbalist. At 16, he was accepted as a conducting student by renowned conductor Pierre Monteux.

In 1973, Brusilow joined UNT for a one-year stint as a visiting professor. Ultimately, he decided to stay.

"I had fallen in love with the school," he said in a 2008 interview with The North Texan. "When I think about it, it was a very important turning point in my life because I went from performance to teaching, and those are two different worlds. Young students may be performing a work they may have never heard before. That's the difference; that's really teaching."

In his first tenure at UNT from 1973 to 1981, Brusilow established the UNT Chamber Orchestra to perform works for smaller ensembles. He left to teach for a few years at Southern Methodist University and returned to UNT in 1989. Under his leadership, the UNT orchestra performed at the Mozart Bicentennial at Lincoln Center, toured Spain and other Mediterranean countries and performed Verdi's Requiem in Monterrey, Mexico.

"Anshel Brusilow was without doubt one of the truly significant leaders in the history of lifting the UNT College of Music into the realm of America's most respected comprehensive music programs," says Jim Scott, retired dean of the UNT College of Music. "As a superlative artist with a background of working alongside the top musicians of the 20th century, armed with an engaging absence of pretense and a frequently irreverent sense of humor, he brought orchestra students to a level of playing well beyond their individual abilities."

Brusilow's impact had far-reaching effects beyond the orchestra and the conducting program, says UNT alumnus Rob Frank (’88 M.M., ’95 D.M.A.), associate professor of composition and theory and director of electronic music at Southern Methodist University. Brusilow helped him and other composition students launch their careers when he performed their pieces with the UNT Symphony Orchestra and the Richardson Symphony. And his support didn't end with graduation.

"I would send him orchestral works that I had written every couple of years," Frank says. "He always wrote back and had wonderful comments and suggestions."

Madeline Adkins (’98), concertmaster of the Utah Symphony and a former student of Brusilow's, expressed her sadness on his passing.

"I owe a great debt to him," Adkins says. "He never stopped encouraging me throughout the years since I left Texas. He'd say, 'Associate is perfectly fine, Madeline, but you should be a concertmaster!' He was a one-of-a-kind individual."

On April 23, 2008, the retiring conductor directed his farewell concert at UNT, leading the UNT Symphony Orchestra with the UNT Grand Chorus. When he stepped away from the podium that night to a standing ovation, he left behind a legacy of musical greatness. That legacy is carried on today by his former students across the world and is reflected in the $1 million Anshel Brusilow Chair in Orchestral Studies, created primarily to raise scholarship money for orchestral students.

"Professor Anshel Brusilow served the UNT College of Music with distinction and remarkable impact for more than two decades," says John Richmond, dean of the college. "He was an iconic and transformational figure in building the orchestral program here at UNT and, by way of the reach of his many impressive students, in nurturing orchestral music in professional and higher-education settings across the nation and around the world. We mourn his passing with a deep sense of loss but also with a profound sense of gratitude for the incredible impact of his life and work."