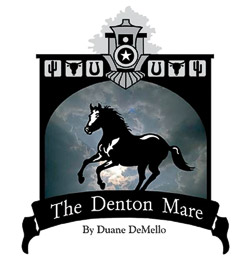 DeMello (’72, ’84 M.S.) wrote the story, which won the Houston Area Booksellers Award, as a master’s stu- dent in the creative writing program at North Texas. He died in 2006 and his wife, Bev (’85 M.A.), has now published the manuscript.

The novel follows Bass from his horse racing days to the shoot-out in Round Rock that ended his life, along the way examining the soul of the man, his friends and his betrayer.

“Bass had his dreams, and I had mine,” DeMello writes in the preface. “When you realize that we are all on a ball of mud, hurtling through an expanding universe faster than the speed of light squared, you realize that we have already ceased to exist, and that we are held together only by uncommon will of spirit. And that’s what keeps our dreams alive.”