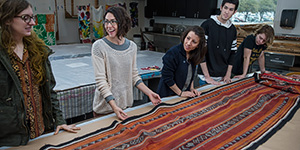 On two different continents in January, Studio Arts Lecturer Lesli Robertson led the same workshop in two different roles – one as a Fulbright Specialist in Kuwait and the other as a faculty member teaching College of Visual Arts and Design advanced weaving students.

Though worlds apart, those workshops were the first step for both the weavers and the UNT students in exploring their own creativity and beginning a collaboration that Robertson will lead throughout this year.

The Fulbright Specialist Program pairs U.S. scholars and professionals with their counterparts overseas and it gave Robertson the chance to further explore how she could share her skills with the women who weave at Al Sadu House in Kuwait.

Robertson joins other UNT faculty and students in making the UNT System one of the nation's top research institutions for Fulbright Scholars this year, according to a review by The Chronicle of Higher Education. Texas' only representation on the list was from the UNT System.

In Kuwait, Robertson discussed making and marketing items using the weavers' traditional designs and patterns in a collage workshop that deconstructed cultural designs to form new ones. The weavers took shapes that were important in their traditional Bedouin patterns, such as the symbol of a triangle, and developed new concepts during Robertson's workshop. The new designs can now be copyrighted and used for exclusive Al Sadu House merchandise.

"By the end of my time there, they had already started weaving with these new designs, creating exciting interpretations of sadu that continued to hold aspects of the traditional cloths," says Robertson. 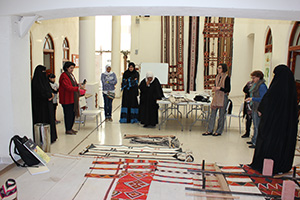 At the beginning of the spring semester, Robertson started her advanced weaving class by giving them the same workshop. This served as a refresher in basic design concepts that will help them with their final projects this semester.

"This activity helped get them to truly think about what we will be doing in the class," Robertson says. "It made for some really good conversations about what they had done and what the weavers from Al Sadu House had accomplished in a five day workshop. I am eager to continue to keep the students connected to the progress as Al Sadu House continues to explore these new designs for production."

Robertson's students have already started collaborations from afar. Junior Michelle Salazar and senior Abby Hudson, both fibers majors, were able to work with Robertson on a 25-foot floor loom prototype for the next step in the collaboration with Al Sadu House. Robertson is proposing an interactive exhibition that will involve artists, students, and community members in Kuwait and the U.S. The Al Sadu House weavers use traditional ground looms that are modified for use indoors. This proposal involves creating an interactive loom that will be designed to promote the awareness of sadu weaving, engage the community in the textile arts and promote cultural exchange.

"I grew up in the Middle East so, for me, it was exciting to have that cultural experience with this project," says Salazar. "I like the fact that we're learning about traditional and cultural methods and incorporating those into the curriculum, which tends to be more contemporary." 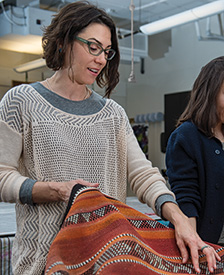 The students had to cast the prototype from cement and then work out suspension issues since it is such a long loom, says Hudson. They were able to practice on it to ensure it worked as it is intended.

"It's supposed to turn continuously and make a circular weaving, so we wove a couple of pieces to see how it worked," says Hudson.

Robertson and her students have kept in touch with Al Sadu House. The fibers topics class also has studied woven pieces, photos and videos that Robertson brought back from Kuwait.

"The work the weavers there have done is so impressive," says Salazar. "Being able to see the different techniques they use that we weren't aware of or that we had only just read about was important."

In addition to a trip back to Kuwait later this year through the Fulbright Specialist Program, Robertson may go back to Al Sadu House one more time – and each time it will benefit her students, she says.

"When I was there, I was able to work with some fascinating women," says Robertson. "As I develop a stronger relationship with Al Sadu House, I hope that my students will, too."