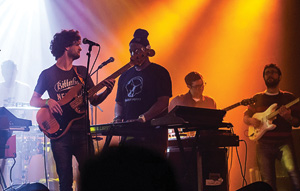 Snarky Puppy, the band formed at UNT, has had a record year.

The group won their second Grammy Award in the Best Contemporary Instrumental Album category for Sylva, their work with Metropole Orkest.

The band members graced the cover of February's issue of Downbeat, which is a national magazine devoted to jazz and blues music.

The band was also was featured in NPR, which described their work as "music for the brain and booty."

The New York Times spotlighted the band in a story called "A House Built on Solid Funk," which focused on its collaboration with rock legend David Crosby.