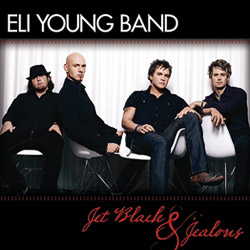 Four alumni and Sigma Nu brothers known as the Eli Young Band are enjoying award show nods and appearances on The Tonight Show and Jimmy Kimmel Live! Their latest CD, Jet Black and Jealous (Universal South), debuted on Billboard’s country album chart at No. 5. The band was nominated for an Academy of Country Music award this year as the Top New Vocal Group or Duo, based on fan votes, and its “When It Rains” video is in the running for the CMT Music Awards’ Group Video of the Year, also voted on by fans (the show airs June 16). Band members are Mike Eli (’04), Jon Jones (’04), Chris Thompson (’04) and James Young (’02).