DENTON RANKED FIFTH BEST COLLEGE TOWN: Denton is ranked as the 5th best college town in the country by Livability.com thanks to UNT and TWU. They even love #Dentoning!

Posted by University of North Texas on Saturday, August 8, 2015

Livability.com named Denton the fifth best college town in the United States. Cities were ranked based on criteria like diversity, affordable housing, local restaurants and a high percentage of jobs in the education sector. The honor comes on the heels of Denton being recognized as the Official Best College Town in Texas in 2014.

Of course, we would've ranked Denton even higher because we know there are so many fun and cool things happening around town.

We've picked five of our faves: 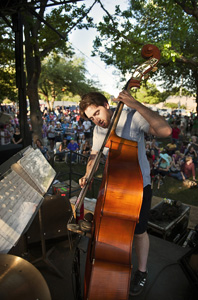 1. Festivals. Denton has great festivals all year long. The Denton Arts & Jazz Festival in April, 35 Denton in March, the Denton Blues Fest and Oaktopia in September and many more spotlight amazing musicians, but Denton hosts lots of other festivals, too. The Day of the Dead festival offers spooky Halloween fun. The Texas Storytelling Festival brings in storytellers from around the world every March. The Denton Holiday Lighting Festival features lights, music and wassail – and even the occasional Krampus. The Thin Line Film Festival in February offers movie lovers the opportunity to enjoy screenings of independent film. There's even the Denton Redbud Festival in April to commemorate the city's spectacular plant life. The list goes on.

2. Music. Denton's music scene always has been amazing, but in recent years, it's received special notice and acclaim, including being internationally recognized for the indie rock music scene. Musicians from Denton perform around the nation and the world, they rack up Grammy wins – and they often return to their hometown to play special sets for their fans. Want to hear tomorrow's superstars today? They're performing nightly in Denton's clubs, concert halls and festival stages.

3. Food. Denton has lots of great places to eat. You can taste something new and exciting almost every day if you know where to look. There's even a small fleet of food trucks roaming the city , offering everything from ethnic food and barbecue to health-conscious meals and waffles. And you shouldn't miss the spectacular Denton Farmer's Market – because you need your fruits and vegetables, as well as your homemade treats, clothing, crafts and more. 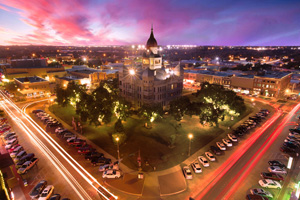 4. The Square. Your Denton experience is not complete without a visit to the historic Downtown Square. Centered on the gorgeous Courthouse-on-the-Square, the area is listed on the National Register of Historic Places and includes lots of great shops, restaurants and nightclubs. You'll find art (especially at UNT on the Square), antiques, clothing, live theatre, comics and games, specialty candy, coffee (oh, so much coffee), used books, museums and more. Several of the city's events and festivals take place here, too.

5. #dentoning. It's not just a hashtag – for many Denton residents, it's a way of life. #Dentoning is what happens when you get out of your usual routine and explore the city. Found a new restaurant, a new store, a new park, activity, band or even just met some cool Denton folks you didn't know before? Hashtag 'em and share what you've learned. That's what #dentoning is all about – experiencing this amazing, unique city first-hand, by yourself, with friends and with new friends you haven't even met yet. 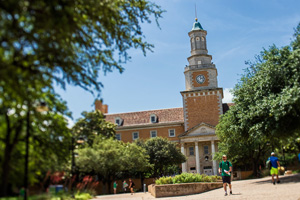 Bonus 6. The University of North Texas. The contributions of students, faculty and staff from UNT help make Denton a great place to live. Their efforts and talents are so much of what makes Denton cool – they volunteer and create music, art, dramas, films, crafts, food and more. The people who make UNT cool are the people who make Denton cool, too. So thanks to all of you for helping to boost Denton – and congratulations!

Watch to see how UNT contributes to the progressive, creative and independent vibe of Denton, which was named the 2014 Official Best College Town in Texas.

Rand McNally and USA Today's Best of the Road competition has the City of Denton as a finalist for the "Most Fun Small Town in America."