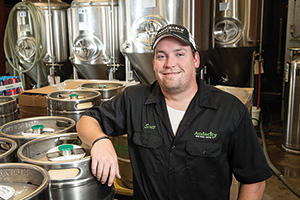 Scott Lindsey (ʼ04) got his first taste of craft beer at a restaurant in Fort Collins, Colo., in 2007, and it was an experience he will never forget.

"Before that day I was only familiar with the big American beer brands that you see on TV every few minutes," Lindsey says. "Honestly, I wasn't even a huge fan of beer at that point. But I immediately fell in love with the sense of community around craft beer, of the fun social side of the industry. I started meeting people and networking, and came across my current business partner, Doug Smith."

Lindsey and Smith put together a business plan and made their way back to Denton in 2014 to launch Audacity Brew House.

Read about other alumni taking the wine and craft beer industry by storm.

"Audacity has a very diverse atmosphere," says Lindsey, who majored in international studies at UNT. "It's a huge place, it's family-friendly and it's a lot of fun. Really, it's an experience very similar to going to a restaurant, where you can taste flavors you've never had before and enjoy time with family and friends."

Today, Lindsey and his team are putting the final touches on plans to expand Audacity to three locations, including a downtown Denton brew pub featuring a full restaurant and space for live music performances. Recently, Texas Motor Speedway tapped Lindsey and his team to create a specialized craft brew, which was named No Limits Checkered Past Texas Ale. The ale is available at the speedway during race weekends and at a variety of retailers throughout the area.

Learn more about Lindsey and Audacity. 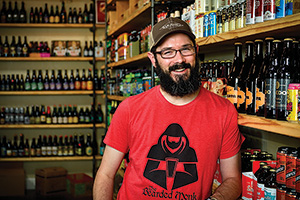 Ben Esely ('08) has always been interested in owning a bar. While he was a student in UNT's College of Business, he spent a lot of time learning about the industry. He interviewed bar owners and learned the ins and outs of creating a business plan and finding investors.

Then, in 2007, he was recruited for an internship at a mortgage company that later led to a job offer.

"At the time the mortgage world looked really promising," Esely says. "But then 2008 came around, then 2009, and the recession kept getting worse and my company went through layoffs. That's when I decided that I was not meant to work for anyone else."

Once again, Esely found himself thinking about owning a bar. So, he started working on a business plan and began blogging about craft beer at BeerDrinkersSociety.com. Then, in 2015, he opened The Bearded Monk, a craft beer-only bottle shop and growler fill bar, on East McKinney Street in Denton.

"Denton is such a great city," Esely says. "Denton is weird and it is very accepting of the unusual, the unknown, the strange and, most importantly, the passionate. That's what you find downtown. Denton residents want to visit small businesses where locals put their blood, sweat and tears into their ideas. This is also what makes craft beer so successful in Denton. People here want their beer to have a story and a personality. They want to try new things and learn about different flavors and brewing styles."

Now as a UNT Alumni Association partner providing craft beer at the UNT Alumni Pavilion before home games this fall, Esely is bringing his industry passion back to UNT.

Learn more about Esely and The Bearded Monk. 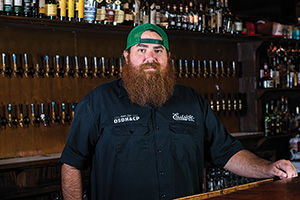 After a decade managing at Lucky Lou's and observing customers with increasing interest in craft beer, John Williams ('05) launched his own bars with hopes of making Denton a destination for craft beer enthusiasts.

"The craft beer industry is exploding right now and growing throughout Texas," says Williams, who earned a bachelor's in entrepreneurship and strategic management. "When I started learning about the industry, there were only one or two breweries in Texas and now there's almost 100."

"Some people might say I'm crazy to open two bars right down the street from one another, but they offer different things and appeal to different crowds. With large patios, access to food trucks and frequent events and parties, it's more about creating community," Williams says. "It's not a bar to get drunk, but a place to come and socialize with people -- a fun and friendly atmosphere where you can relax in in community."

"We have a section on the visitor's side that we fill with young alumni and friends that I went to school with who are passionate about UNT football," Williams says. "It's a great deal and a wonderful way to support UNT."

Learn more about Williams and his bars by visiting Oak Street Drafthouse and East Side Denton.