The corridor of years 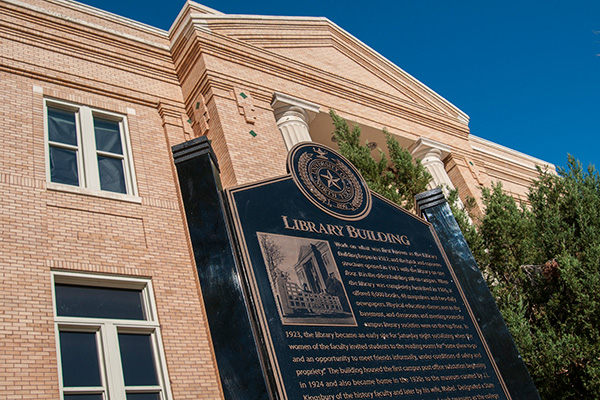 When the first building on campus — the Normal Building — was completed in 1891 on the site of today's Hickory Hall, a barbed-wire fence was needed to keep out livestock. Students gathered in the building daily for chapel, but at night, even the bravest avoided its bell tower, which made ghostly noises in the wind.

UNT has come a long way from its beginnings as a 10-acre campus carved from the prairie west of town, and new historical signs now commemorate that first building and 10 others. The signs were dedicated at the University Day opening ceremony April 12.

"We wanted these signs to create a sense of community and to bring the rich history of UNT to life," says Warren Burggren, provost and vice president for academic affairs. "As the university continues to grow, it's important to remember where we've come from and the experiences of those generations who've gone before us and made us who we are today."

Burggren proposed the series of markers for sites of historical interest on campus and representatives from University Archives, Facilities, and University Relations, Communications and Marketing helped create the signs. The Office of the Provost and Facilities covered the cost, with additional markers planned as funds allow. 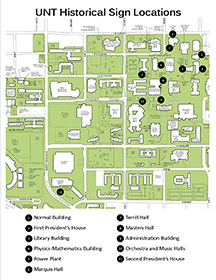 Some of the signs commemorate existing buildings, such as Curry Hall, which opened 100 years ago as the first library building on campus. Others mark the sites of buildings that no longer stand, including two President's Houses built in 1909 and 1956.

Jim Laney (’79, ’82 M.Ed.), professor of teacher education and administration and grandson of President J.C. Matthews (’25), remembers well the more recent President's House where he visited his grandparents as a child. It sat alone at the site of today's Gateway Center, across from a new Fouts Field.

"We would make home-made ice cream on the front porch, and the grandchildren and adults would shout across the front lawn to hear the echo bouncing back from the massive concrete walls of the stadium," Laney says.

He remembers the den as the "informal heart" of the house.

"My grandfather watched the nightly news there while working his way through a stack of official-looking papers and greeting a seemingly endless parade of visitors," he says.

The Matthews family had previously lived in the 1909 President's House, which stood on the site of the old Normal Building at Hickory and Avenue B. The president's youngest son, Kenneth Matthews (’65), remembers the three-story house fondly, especially its attic playroom, the balcony that served as his pirate ship and the front parlor that held the family's first-ever television set.

"My father was not sure that the purchase of a television was in our best interest, but he relented," Matthews says. "Imogene Bentley Dickey Mohat, the dean of women, was a guest at our home many evenings to watch TV and became more a part of our nuclear family."

Another sign commemorates the site of Masters Hall, built in 1951 where the north part of the Life Sciences Complex stands today. Originally shared by the biology and chemistry departments, the building was a major improvement from the cramped quarters of the 1910 Science Building.

William King (’51), an alumnus who went on to become a doctor, helped move equipment into the new building as an assistant in the biology department. He taught a class in its modern lecture hall, which he remembers as “luxurious” compared to the former space.

James Marshall, professor of chemistry, recalls that the new building improved even more when amenities such as air conditioning were later added.

"In the summer, all the labs were held at 7:30 a.m. to avoid the heat of the day, and the chemistry labs were particularly bad because steam heat was used for the chemical reactions," he says. "I bought a window air conditioner in 1967 to keep the ether from boiling away."

The historical signs on campus are: