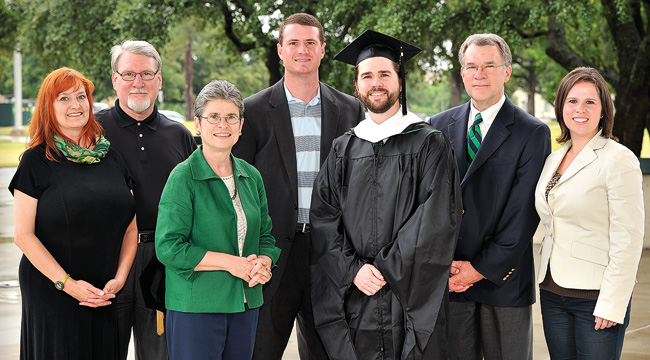 "This university is and has always been deeply rooted in the community, and our family is part of that community," says Celia Williamson, Sam’s mother and UNT’s vice provost for educational innovation. "I have worked at UNT for 24 years, and my family is proud to hit the century mark."

M.D. , whose father Elmer began the UNT family tradition, taught industrial arts at the university from 1962 to 1984, and his son David, associate professor of sociology, joined UNT in 1992. David and Tim both attended the lab school.

In her time at UNT, Celia says she has seen the university grow into an institution focused on sustainability, not just with an eye toward preserving the environment, but also in finding balance among many fields of study.

"Society is sustained by the arts as well as by the push of new scientific discoveries," she says, "and I believe that a great university’s role is to contribute to society through teaching and research that engages the breadth of life. "

Emily says that what sets UNT apart from other institutions is the small-town, community feeling that finds a way to thrive on such a large campus.

"It’s neat to be part of a family who has been in the UNT community and in Denton for so long," she says. "I love hearing from people who studied with my grandfather or were taught by him or my mom or uncle. We have so many connections to the community, and we’re very happy about this milestone."

Sam, who was among the first to earn UNT’s new innovation design degree, plans to continue his family’s legacy. Using the skills and experiences he gained through his studies and in the Peace Corps, he hopes to design curricula that will more fully engage public school students, finding solutions to the preparedness gap many students experience when they leave high school for a job or to begin college.

"I take pride in being here and seeing the kind of fingerprint my family has left in this area," Sam says.

"It’s important to me that our family tradition of educating in this region doesn’t stop with me."