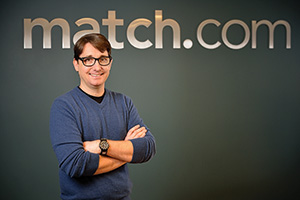 Every day he walks to his office, Shane Henderson ('97) passes a wall of thank you letters, wedding invitations, baby announcements and vacation photos of couples at Match.com's headquarters in Dallas.

For Henderson, vice president of technology at Match.com, the wall is a reminder of the reason for the company's existence, and it also represents the success he and his team of software engineers have achieved through the creation of innovative web and mobile applications to help singles find their soul mates.

"Match.com is at the forefront of a cultural shift that has fundamentally changed the way people connect, communicate and find love," Henderson says. "At the click of a mouse or the touch of a mobile screen, singles have instant access to connect with other singles, which is why Match.com has led to more dates, more relationships and more marriages than any other dating website."

Using cutting-edge software, the latest mobile technology and ingenuity, Henderson has been helping singles meet for more than a decade, playing the role of a modern day cupid. He's among UNT alumni who are using the skills they learned at UNT to achieve success in their careers and drive advances in telecommunication industries.

Read a feature story about UNT leaders in high technology

"UNT prepared me by helping me learn not only the technical side of software development, but also the business side," Henderson says. "My degree was very well-rounded and once I graduated I was able to use not only my technical skills, but also my business skills to build complex and scalable Internet e-commerce systems for companies."

Henderson joined Match.com in 2000, five years after the Internet dating company launched on the web. And since that time, with his leadership, the number of Match mobile users has increased from one percent of users to more than 50 percent, he says. Today, Match.com is used in 25 countries and territories and hosts websites in 8 different languages.

Henderson says he was recruited by a Match.com executive familiar with UNT's strong program in business computer information systems — today's information technology and decision sciences program — in UNT's College of Business, one of the largest business colleges in the nation.

"I graduated from UNT at a time when software development as a discipline and career was taking off and students who were graduating with my degree were — and still are — in high demand," he says. "UNT helped me to reach my initial career goals early in my career."

Since 2008, Henderson has headed Match.com's mobile team, which built the company's mobile platform and apps for iPhone, iPad, Windows Phone, Android and Blackberry to meet the needs of on-the-go consumers and professionals. He also created the "double-blind" technology that strips all users' identifying information from emails sent via the website.

"At UNT, you not only learn the foundations of software development, databases, networking and ecommerce, but you also get a solid foundation in entrepreneurship and business, which is a huge asset to have working for corporations today," he says.

Professor Emeritus Mike Vanecek and professor of information technology Richard Vedder were pivotal in helping him decide the type of software development he wanted to pursue as a career, Henderson says.

"They were very passionate about teaching the many different cutting-edge technologies at the time," he says. "I remember learning the transition from mainframe and midrange computing in the 1990s to more client/server and web technologies in my UNT classes. Today, I rely on the skills that I obtained at UNT in software development."

Henderson hopes to inspire other students wanting to pursue careers in computer science and information technology and decision sciences. He is working with UNT's Career Center to hire students as interns at Match.com.

"I know these programs are strong at UNT, and what better place to work than at Match, where what we do impacts people in their direct relationships with their significant others," he says. We're helping people find their match."