Alumna shares love for theatre and public speaking with others 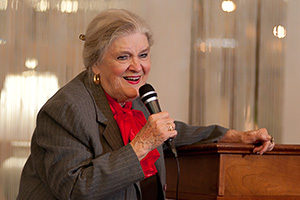 From the time Rose-Mary Rumbley ('52, '53 M.Ed., '71 Ph.D.) was, as she puts it, "itty-bitty" she enjoyed speaking in front of people. Her communications studies degree not only allowed her to develop those skills, as well as study theatre. It influenced the direction of her life.

While acting in one of Floyd "Fessor" Graham's productions during her senior year, she met the Lab Band drummer and master's student, Jack Rumbley, backstage.

"We were in the show and when we met, that was it. We fell in love," Rumbley recalls.

She, a member of Alpha Delta Pi, and he, a member of Sigma Phi Epsilon, were soon pinned. That bond lasted 56 years, until his death in 2009, and gave them two children.

After graduation, they continued to work together. While she worked on stage at Casa Mañana in Fort Worth, he played in the orchestra pit. A professional actress, Rumbley thought she might like to live in Los Angeles or New York City, but found it wasn't necessary.

"The movies came to me," she says.

She played Aunt Billie in the 1973 movie Paper Moon, and had parts in some TV movies.

"My talent agent sent me to the Paper Moon audition. I could turn on a thick Texas accent and that's what they were looking for," she says. "My drama students at Dallas Baptist University took up a collection and sent me to the premier in New York City."

An author of four books about Dallas, as well as a Texas cookbook and a history book about the piano, Rumbley now teaches acting to third-graders at West Dallas Community School and gives speeches and tours through the Emeritus program at Richland College.

In the 1980s, she made the transition to full-time speaker, a job she loves but that requires so much time she can't also commit to acting rehearsals. At 81, she speaks at roughly two engagements a day throughout the Dallas-Fort Worth Metroplex --and as far away as Houston.

Of course, she still finds time to act. On her birthday in September, she and her daughter performed in two Dallas Senior Follies shows.

"I'm grateful for the opportunity to continue to do what I love," says Rumbley, who received a UNT Distinguished Alumni Award in 1986. "My husband and I just loved our time at North Texas."