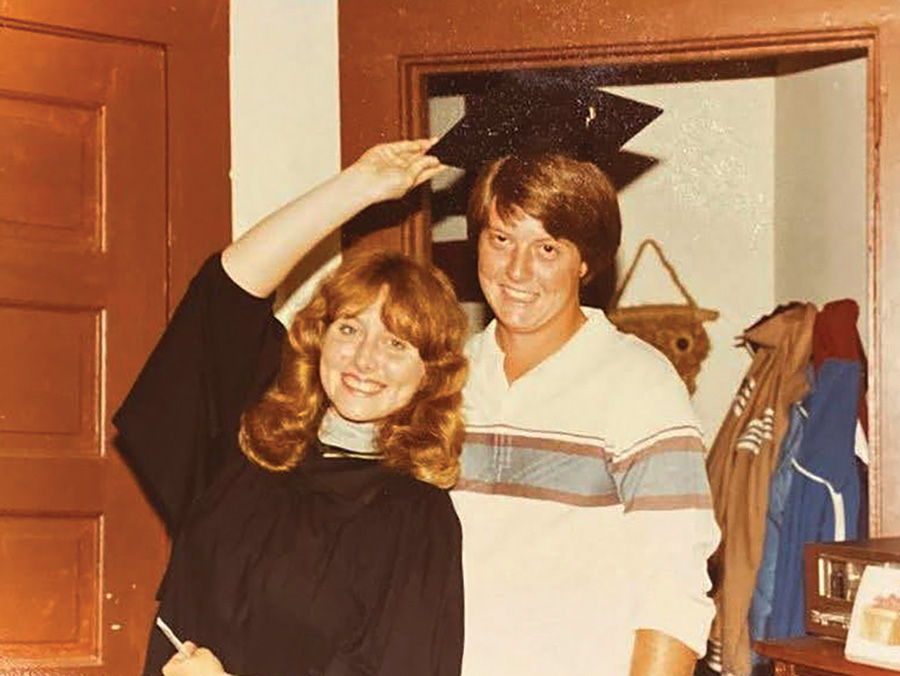 Left: Tami ('79, '81 M.S.) and Chuck McIntire in a duplex they rented for $60 a month on Neff Street. It only had one air conditioning window unit, and Tami remembers keeping the windows open a lot, she loved hearing the jazz musician next door practicing his saxophone.

I enjoy reading the North Texan magazine as a former graduate. I am a middle school STEM teacher in Georgia and love to see the exciting innovation that UNT is leading for STEM. In my career, I've been on a weightless flight, worked with the Georgia Space Grant Consortium, and I am a NASA/SETI Airborne Astronomy Ambassador for Cycle 9. My husband, Chuck, who attended NTSU's graduate program for botany/plant biology from 1976 to 1978, has worked as director of regional and national operations with various professional lawn care corporations and media distribution services, and also was part owner of a local lawn care company for six years.

I also enjoy reading about the stories from former graduates and alums. My husband and I met at then-NTSU in 1976. We have been married since 1979. We met when he was a biology graduate student TA -- I had been assigned to his botany lab as a freshman, but we actually started dating later when we were both in an outdoors adventure club.

However, the story he loves to tell is why there were so many girls in my lab class that he taught. It turns out he and his buddy found out what sections they were going to teach. Back in those days, we had to register for classes in person. So, when he and his buddy manned the tables, they assigned all the girls to the sections they knew that they were going to teach.

Four kids later, with four grandchildren and one on the way this month, NTSU was instrumental in where we are today with both our education and our personal lives. Of our four grown children, three are teachers, and one also married a teacher.

We don't have the opportunity to go back to the campus, so I really appreciate hearing all that is happening there in your magazine. Thanks!

Beautiful feature on the North Stars of UNT and those they impacted. Superb examples of how much UNT cares and matters to so many.

I lived at the College Inn for two years (1966 and 1967), while attending NTSU. What great times and memories!

In 1966, I lived in the back section of the building on the third floor overlooking the parking lot. I was a resident assistant in 1967 and lived in the front of the building facing the pool. The photo could have been taken from near my old room! Thanks for the memories.

After reading about organ donation in the last issue, it reminded me of my journey. It was in an anatomy and physiology lab course at UNT when my desire to become a living organ donor was initially spawned. Every time I studied our cadaver organs, I couldn't quit thinking about how they could have saved so many lives. One late night while studying in the lab, I told my lab partner I wanted to be a living organ donor one day. He was quite dismayed at my comment.

Years later, I shared my desire with my mother and she too had a similar but much more vocal reaction of opposition. I knew it had to wait with my aging parents. They had both passed by June 2019.

The greatest experience of my life, kidney donation to a stranger, occurred Nov. 14, 2019, at University Hospital – University Health in San Antonio. The goal could not have come to fruition without the endearing support of two angels who served as my greatest supporters in attaining this long-term mission. Louisa Gonzales, R.N., and surgeon Dr. Elizabeth Thomas thoroughly reviewed every detail of the process, which gave me extraordinary confidence and assurance that my goal was easily attainable. They are the most beautiful souls for whom I will forever hold a special place in my heart.

I thank the University of North Texas for providing a magnificent experience in an A&P lab back in the '80s that would eventually change my life forever. Reader looks forward to spring issue -- even when he has to wait.
Top