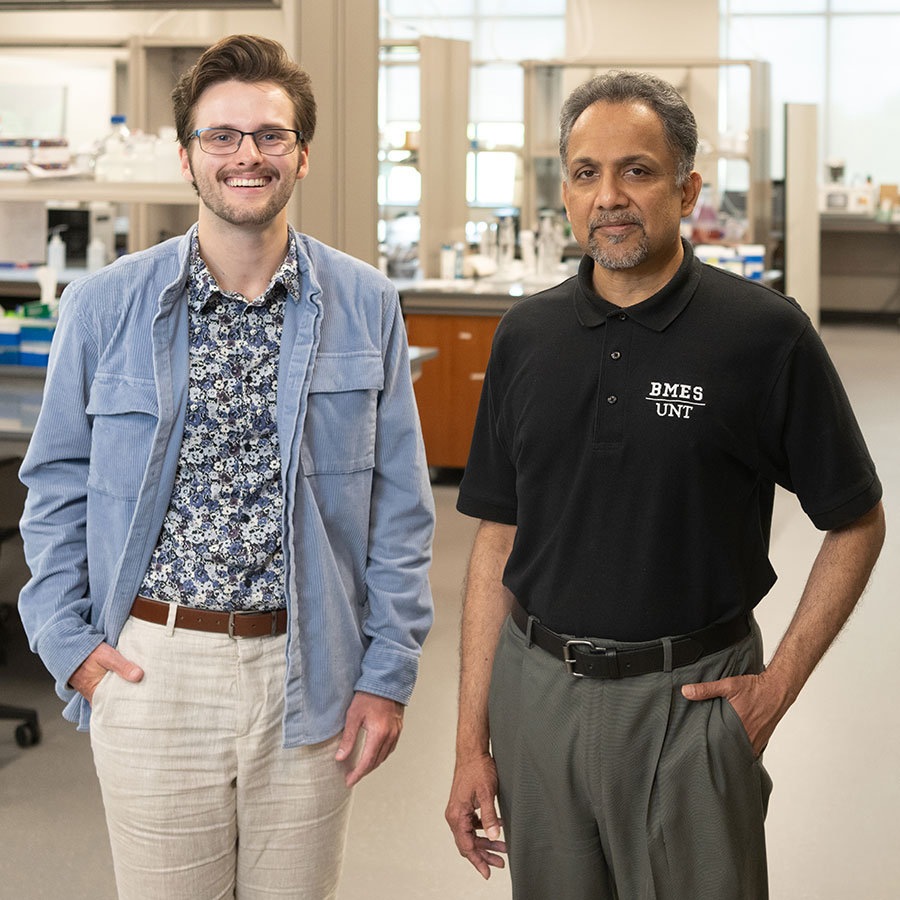 The vision for the biomedical engineering department began on founding chair Vijay Vaidyanathan's notepad. After he was given the nod in 2012 to launch the program for the College of Engineering, he jotted down his ideas. Then, he typed up the proposal.

In the first two years, Vaidyanathan taught all the classes himself. He had to hunt for lab space. He would sometimes bolt awake at night, wondering whether students would be able to find jobs when they graduated.

Nearly 10 years later, UNT's biomedical engineering program -- one of the fastest-growing programs at the university -- is ranked 9th in nation by BestValueSchools.org and has earned full accreditation from the Accreditation Board of Engineering and Technology. Top health technology companies such as Abbott Laboratories, Alcon and Zimmer Biomet seek out graduates of the program.

Vaidyanathan now works out of the 26,250-square-foot Biomedical Engineering Building, a premier learning space that opened in 2019 at Discovery Park and boasts cutting-edge equipment and plenty of available lab space.

For me, building this program has been like creating a startup. From very humble beginnings and a faculty of one -- it's so exciting to see how we've grown.
Vijay Vaidyanathan

"For me, building this program has been like creating a startup," Vaidyanathan says. "From very humble beginnings and a faculty of one -- it's so exciting to see how we've grown."

And the program for the in-demand field is flourishing, further establishing UNT's reputation as a hub for leading innovative research. Students are drawn to the challenge of collaborating with others from across disciplines -- including biology, business, chemistry, computer science, mathematics and performing arts health services. And, they're able to create medical devices and technology that can transform people's lives.

"The goal is to use engineering to promote human health," assistant professor Clement T. Y. Chan says. "Our research will impact not only North Texas, but the whole nation."

In assistant professor Melanie Ecker's case, she is using smart polymers that can be used in the enteric nervous system, specifically the intestines or bowels, so as to enhance treatment of gastrointestinal disorders.

"We've all felt butterflies in our stomach when we are in love, have pain or even digestive problems in stressful situations," Ecker says. "We want to better understand how the brain and gut are communicating with each other."

She envisions a computer chip-like device similar to a pacemaker that is capable of stimulating the enteric nerves to reduce the burden of these disorders. Many devices are made of hard materials, such as silicon wafers, which can't stick to the guts.

But Ecker's polymers can change shape based on the stimulus when inserted into a body part. She and students in her lab hope to develop materials that will stretch and conform to the guts and have electronics embedded to "listen" to the nerves in the intestines, then record and decode the electrical signals they are sending to the bioelectronic devices.

"We want to have a material that is as stiff as uncooked spaghetti during the implantation, but softens inside the body like the cooked version," she says. 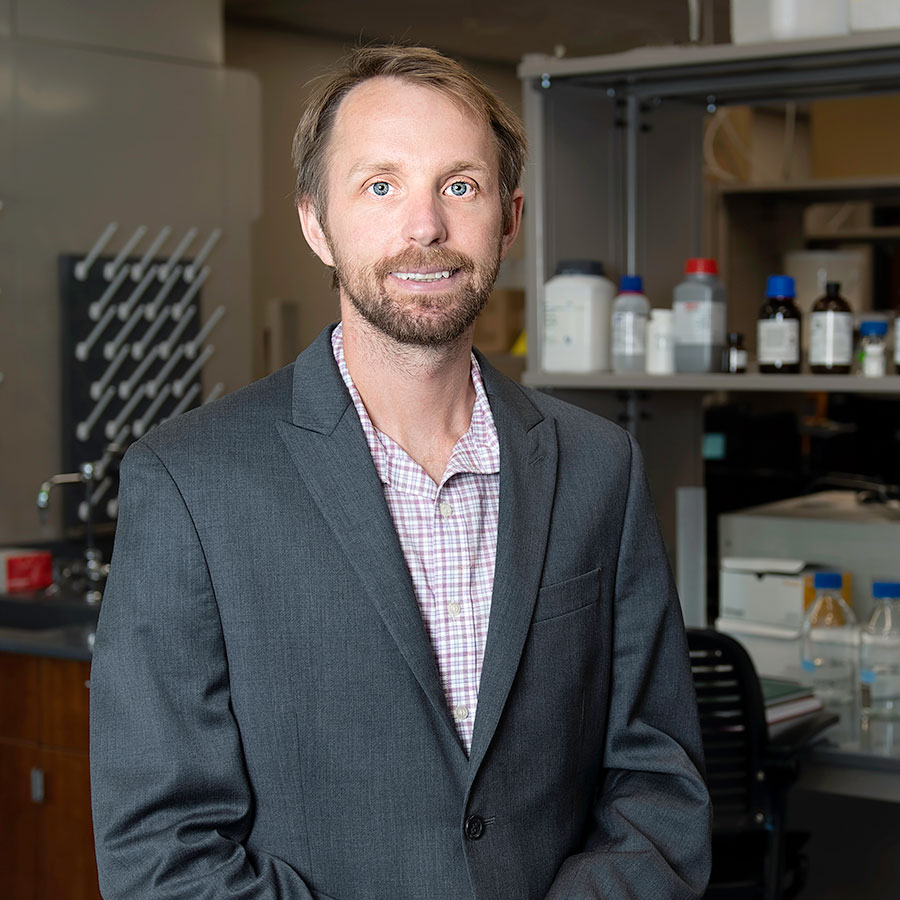 Assistant Professor Brian Meckes and his research team are exploring better ways of delivering nanoparticle therapeutics to targeted cells by taking advantage of changes in the cell membrane that occur in diseased cells. The hope is to find better treatments for cancer, osteoarthritis or fibrogenesis. His research earned him a 2021 Ralph E. Powe Junior Faculty Enhancement Award from Oak Ridge Associated Universities.

"The research shows that cancer cells that are very metastatic -- the most aggressive cells -- tend to be the ones that are stiffer," Meckes says. "In targeting by the nanoparticle, we can look and see if there a difference between the membrane structure in a cell that is soft and a cell that is stiff. And now we have a potential therapeutic target."

And Chan received a grant from the National Institutes of Health for his project, in which he and his team are trying to engineer bacteria -- safe for humans to ingest -- to specifically target, detect and recognize a range of pathogens or toxins. The bacteria, designed to sit in patients' guts, will generate a color pigment such as red, green or yellow. The pigment then shows up in a fecal sample, allowing scientists to determine what is ailing the patient. It's more efficient and cost effective than current methods of diagnosis and allows for treatment to begin more immediately.

What approaches can we use to tackle a problem? It's very exciting and rewarding to take a project to the next level and improve people's health.
Clement T. Y. Chan

"What approaches can we use to tackle a problem?" Chan says. "It's very exciting and rewarding to take a project to the next level and improve people's health."

The program's students bring that same enthusiasm and creativity to their studies. At Discovery Park, they work in a makerspace, which includes a virtual surgery table where they can "remove" organs and "transplant" prosthetics. A bio 3D printer allows them to print artificial skin. The space is filled with their projects, such as a wheelchair that helps users climb stairs, a therapeutic chair to decrease pain, and an inflatable airbag for senior citizens to wear to help ease a fall.

As part of their capstone project, seniors are required to work together to create a device. Alexandra Teoh ('21) was part of a team that created a biomaterial that mimics the drug absorption properties of the laryngeal mucous membrane for the startup medical device company DUALAMS. The team used a UV curing system to make it and a compression testing machine, which tested the efficacy of their biomaterial compared to the typical testing methods -- eliminating the need for animal testing.

Teoh, who began studying at the University of Texas Medical Branch at Galveston this summer, is working toward a career in both pediatrics and research.

"Biomedical engineering sold me on pursuing research," she says. "I really want to make sure my career is dedicated to creating solutions to help others."

At a Plano high school summer program, Trevor Exley ('20, '21 M.S.) found his calling when he created a 3D-printed hand controlled through his own muscles. Later, he was persuaded by Vaidyanathan's vision when he came to UNT (he also wanted a taste of the prestigious music program and played trombone with the Green Brigade and Nine O'Clock Lab Band during his undergraduate years).

Exley's decision was affirmed by attending classes -- and he also realized after taking the Artificial Intelligence for Wearables course taught by Assistant Professor Mark Albert that the biomedical engineering field demanded knowledge in multiple disciplines.

"You're always going to have to be learning," Exley says. "Last year, I was scrambling to learn Python (programming language) just so I could jump into machine learning."

For his master's degree, he used machine learning to examine the data of individuals with Parkinson's Disease standing on force plate sensors. These sensors determined how the individuals were allocating pressure and measured such things as tremors.

Alternative tools such as those can be especially valuable and affordable for telemedicine and remote clinics -- and help health care workers in organizations such as Doctors Without Borders who don't work in traditional hospital settings.

Exley is now one of the first students in UNT's biomedical engineering doctoral program, and he says he couldn't find a better fit for his career.

"The doctoral degree will set me up to conduct research independently, sharpen my focus and become an expert in the field and contribute to science," he says. "I'll gain insight working on collaborative projects and look more closely at personal cases where I can innovate for medical devices to be more accessible and affordable to those who are in need."

According to the U.S. Department of Labor, biomedical engineering will become the fastest-growing engineering field over the next decade with job growth rates of more than 60%.

UNT is primed to deliver on its mission to create degrees that prepare graduates for the rapidly changing marketplace. And with its unique approach of combining research and business skills, UNT's program is supplying this growing workforce in industry, hospitals, research institutions and for entrepreneurs. Founding chair VijayVaidyanathan, a natural fit, has brought invaluable experience to the program as a researcher who has worked in business and academia.

Classes started in 2014 with a group of 45 students. Two years later, the department added more faculty. And, in 2017, the graduate program began.

This fall, the program debuted its Ph.D. program with 22 students, who can choose between a traditional research track or a health care startup track in collaboration with the G. Brint Ryan College of Business. And the department welcomed three new faculty members -- bringing with them half a million dollars in grant money -- to its staff of 11, who have won prestigious national awards and grants.

"America's next big field for innovation is medicine," says Edward Sean Gates ('18, '21 M.S.), the department's lab manager. "Medical devices and products need levels of engineering to ensure that human interaction with technology is safe, secure and reliable. With a multidisciplinary approach, we're working to build a better smarter tomorrow together."