hen Joshua Bova ('16, '18 M.S.) came to UNT as a business major, he figured the Introduction to Geography class would mainly consist of looking at state capitals.

But he learned it was more than that. Geography can be used to understand the potential effects of climate change, to determine sites in need of infrastructure and transportation improvements, and to analyze customer profiles and demographics.

"I was like, 'Whoa, wait a second,'" he says. "It's about connecting places, people and behavior. It's behavior over time and space."

Bova, so compelled by the subject, switched his major to physical geography and earned his master's in business geography. Now as a research associate for Invesco, a Dallas-based real estate company, he investigates real estate, economic and demographic data to uncover insightful patterns that help drive the investment decision-making process.

And he uses geographic information systems (GIS) -- software that employs data and coding to provide solutions for real-world problems using a spatial, or geographic, context -- to do it. UNT's Department of Geography and the Environment offers a GIS certificate for undergraduate and graduate students, allowing them to pursue careers in every field imaginable -- business, transportation, environment, government planning, emergency management, retail, real estate and health.

For example, GIS can be used to make a map of cancer mortality rates, with perhaps rural areas lighting up in one area because of a large elderly population or environmental causes. GIS can give directions, map traffic accidents, analyze voting trends, determine the location of retail centers or predict the formation of sand dunes in New Mexico.

Everything is located somewhere and the 'why' is what we're interested in,
Joshua Bova

"It's the ability to visualize data," says Chetan Tiwari, associate professor of geography and the coordinator for the undergraduate GIS certificate. "And how you get a map to tell a story."

He focuses on a geographically defined area to see how many people live there and to gather other information, such as their drive time to and from work. His team develops a grid system that takes all those disparate data sources and combs them for specific locations so they can create more detailed trade areas.

"Everything is located somewhere and the 'why' is what we're interested in," Bova says.

As a sergeant for the U.S. Army on tour in Iraq and Afghanistan, Bova mapped soldier and enemy movements and supply routes, taking into account such factors as weather and lighting, since the enemy could see better with a full moon. He didn't realize it at the time, but he was using geography.

"The seed was planted but it didn't bloom until I was at UNT," he says.

When he took his first geography course from associate professor Alexandra Ponette-González, he was fascinated by the way she communicated "the intricacies of how the world works on a simple, yet refined, level."

"Only a few weeks into the semester I knew my calling was in the world of geography," Bova says.

He participated in internships with the city of Denton's solid waste and sustainability divisions. For his master's thesis, he used GIS to analyze how retail chains affected local retailers within certain districts in Denton.

At his current company, Bova identifies the best real estate assets in the best locations by using geographic techniques and spatial data. One sector he focuses on is retail. For example, he looks at factors such as demographics and if signage can be viewed from the freeway. A chain store wouldn't want its locations too close to each other. A hail damage repair shop wouldn't be located where it doesn't hail. 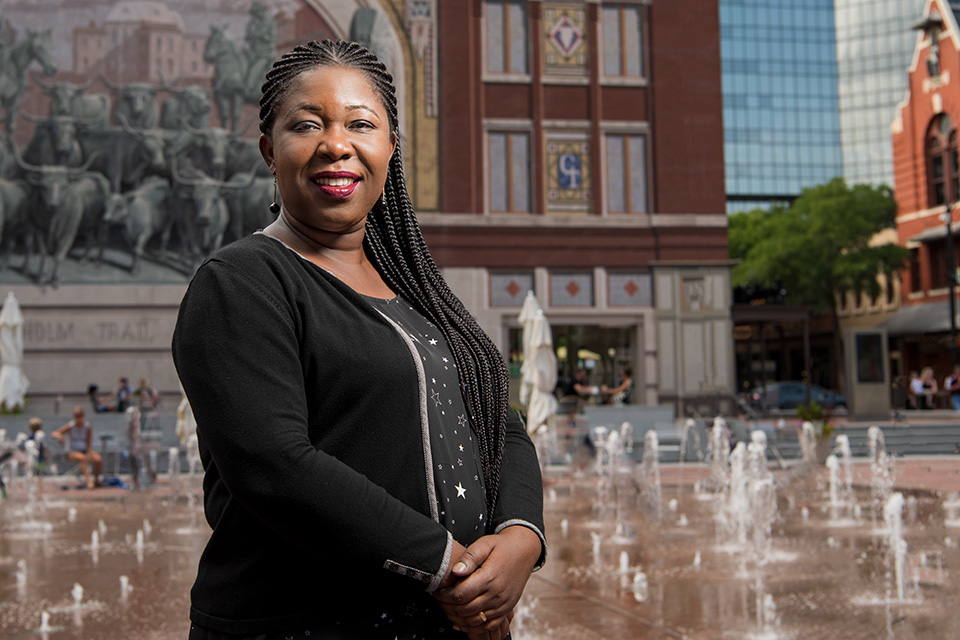 Faustina Ankomah ('01 M.S.) was used to creating maps with pencils and stencils. But that changed when she was introduced to GIS as a geography and sociology undergraduate student at the University of Ghana.

"If you can see it on a map, you can remember," she says. "I can give you a lot of statistics and data trying to form associations and you can walk away without remembering the exact statistics. If I show the area of concentration -- this red area is ground zero -- you can easily make an association."

Ankomah came to UNT for her master's degree on the advice of her brother Kweku Donkor ('01 M.S.), who also majored in applied geography and now works for the Federal Aviation Administration in Frederick, Maryland. For her thesis, Ankomah conducted a geographic analysis of teen births in North Texas, finding that socioeconomics was a more prevalent factor than race.

After graduating, she worked as a GIS analyst and coordinator for the Denton Central Appraisal District from 2002 to 2008, then served a yearlong stint as a consultant for the city of Denton before landing her job at XTO Energy.

In her current position as scrum master, she makes sure that the team's tasks -- such as development and testing -- are aligned.

"Once things go from progress to done, I get a rush of happiness," she says.

For XTO, a subsidiary of Exxon Mobil, the team could be finding oil and gas around the United States. If 500 gas wells show up on a map, but 200 wells show up in one particular area, then that raises questions.

"What is it about that area that makes it easier to dig gas?" Ankomah says. "The rock formation on the surface will make you look at things further down. The visual connections are easier to remember with maps."

While working as an intern and geographer for the U.S. Army Corps of Engineers, Jennifer Holland ('08, '11 M.S.) was approached by her bosses. Would she be willing to write code in GIS?

"That one question has definitely shaped and guided my career," she says.

She was already enrolled in the GIS programming class taught by geography professor Pinliang Dong, and her bosses' query led her to translate her GIS skills for the federal agency, which provides engineering and construction for infrastructures, waterways and recreation areas. By writing code to automate tasks or create custom GIS web applications, she can create online maps and webpages showing information the agency needs to manage.

"It takes a special mind to write code, and I didn't realize I had that," she says. "The process is kind of addictive. It's like solving algebra problems all day. It's very exhilarating when you get it done."

Holland says geography makes her happy, combining her love for the outdoors and geology -- she collects rocks -- with meteorology and hydrology.

"I've always wanted to help people through my work in whatever way I could," she says, "and there's a geographic component to everything we see."

For her thesis at UNT, she used a factor analysis and other statistical and spatial techniques to understand the ground­water quality of the Trinity Aquifer and the influences on it, such as hydrochemical processes, agricultural activities and land use.

"My analysis helped us to understand the aquifer better," says Holland, who also works as a GIS adjunct professor at Tarrant County College. "In my thesis and career, I've wanted to find subjects I love and use GIS to understand them."

When he was a high school student in China, Zongpei Tang ('06 M.S.) received a gift -- a map with an aerial photograph of his hometown of Kunming, China. His best friend, a middle school classmate who was crazy about maps, thought Tang would enjoy them too.

Tang looked at that map every day, fascinated that he could see the stadium, a park, roads, mountains and streams.

"It was the first time that I had a whole picture of what the city looked like," he says. "I felt like I was a giant in a small world when I was reading the map. I could find a shortcut to the museum from my home, locate the park I had never been to before and do much more. That was the magic of the map."

"GIS marries art and science perfectly," he says. "It can handle complicated spatial analysis and modeling, and also visualize geospatial data and their spatial relationships through art."

Tang earned his undergraduate degree in China, majoring in economic geography and urban planning. He worked briefly for a government agency but wanted to get back into geography -- particularly GIS, because it meshed with his interest in computers. He chose to pursue his graduate degree at UNT after he was offered a teaching assistant position.

For his thesis, he developed a "fuzzy modeling approach" using GIS to assist people in finding the best residential locations based on factors such as school rankings and proximity to parks and retail centers.

Tang has been at Halff since 2007, where he's working on a project for FEMA that updates the flood insurance map for several North Texas counties. The map, using hydrologic and hydraulic modeling, will feature a 100-year floodplain that shows which properties need to buy insurance.

"A picture is worth a thousand words," Tang says. "A map is even better."