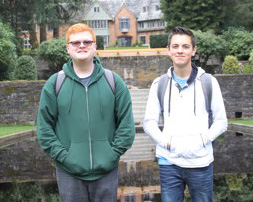 From left to right, James Renfroe and Matthew Hernandez.

UNT debaters finished in the top 44 teams at the National Parliamentary Debate Association's national tournament and the National Parliamentary Tournament of Excellence, both held at Lewis and Clark College in Portland, Oregon, this spring. At the Tournament of Excellence, sophomore accounting student James Renfroe (pictured left) and junior journalism student Matthew Hernandez (pictured right) ranked No. 42. Renfroe and junior business student Michael Pulver ranked No. 44 at the national tournament, where 130 teams competed from around the country.

The NPTE began in 2000 as the premier national competition in parliamentary debate.