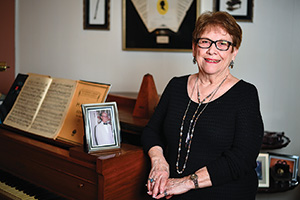 My mother says on the night I was born, she picked up my dad after one of his shows at Casa Mañana, where he played in the orchestra, and drove straight to the hospital to have me. Music was definitely in our blood!

My dad -- David Singletary -- had been raised at the Masonic Home in Fort Worth. His nickname was "Doc" because he started his college studies to be a doctor, but music was his life and he spent many years as a professional clarinet and saxophone player in the area.

Our history at North Texas began in 1950 when he left San Antonio Music Co. to accept a position in the music school. Even though I was entering the seventh grade at the campus lab school and far from college age, I spent many hours in his room on the second floor of the Music Hall.

Dad was in charge of the musical instruments that were available to the music students on a loan basis. He not only kept tabs on the instrument inventory, but he repaired any and all instruments when necessary.

Many students came to Dad for help with their own musical instruments, especially in the woodwind department. Loaning out his tuxedo also helped a few aspiring musicians along the way. He kept up his musical expertise by rehearsing with the North Texas orchestra and playing various concerts in Fort Worth whenever possible.

Many of the music professors and teachers were friends of mine and our family. 'Fessor Floyd Graham was one of my favorites. The Saturday Night Stage Shows he conducted in the Main Auditorium would start with a short pit orchestra program and then a stage show featuring the Aces of Collegeland stage band. A popular movie followed the live show. All this cost students less than $1!

'Fessor included me and my dancing partner, Jerry Knight, on many shows. Our favorite number (and 'Fessor's) was a Charleston routine. Pat Boone performed a few times while he was a student.

When I was ready for college in 1956, of course I chose North Texas and majored in music. I vividly remember waiting and pacing the Music Hall each semester for my turn in the "jury" room. Everyone was signing up for a few minutes in one of the tiny practice rooms on the hall to get that last minute of practice time before the dreaded appearance in front of the jury of faculty members who would grade us.

I also worked at the Trading Post bookstore in the basement of the Union Building for Andrew "Swede" Swenson. His wife, Helen, was the librarian at Denton High School. She was my inspiration to become a librarian later on.

I stopped work on my music degree after a couple of years to get married. Dad worked another decade, retiring just about five months before his death in January 1968. I decided to return to school that year, while my three children were still young, and become a teacher. I dreaded the long registration lines, but I was happy to see 'Fessor, who signed me up for his music class for elementary school teachers.

In 1970 I received a bachelor's degree in elementary education with a minor in music. I returned for a master's in library science and was a teacher and librarian in the Fort Worth ISD for 32 years. I continue to take tap lessons and plan to dance as long as I can move my feet!

I believe our move to Denton was a catalyst for my future education. My lifelong love for music, dance and theater is due to the wonderful experiences I had with my dad and so many talented teachers at North Texas.

McClendon was one of the first Montessori teachers in the Fort Worth public schools. Her husband, the late Richard McClendon, also attended North Texas.