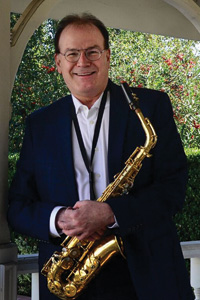 During the 2017 Academy Awards ceremony in February, Dan Higgins ('77) sat in the orchestra pit with his fellow saxophone and winds players, secretly hoping that some of the scores he played on would win the Oscar.

His wish came true. He watched as La La Land picked up six Oscars. Higgins has amassed an incredible résumé as a Hollywood musician, appearing on tons of music scores, most notably playing solo in the 2003 Tom Hanks movie Catch Me If You Can. He also performs regularly at the Grammy Awards, on Dancing With the Stars and with the Los Angeles Philharmonic.

But he gets some of his biggest fan responses as sax-playing Bleeding Gums Murphy on The Simpsons.

"It's interesting that so many people know me for that alone," he says.

Higgins grew up playing the flute, clarinet and sax and was attracted to North Texas because of its stimulating jazz environment. He made the Six O'Clock Lab Band and advanced to the One O'Clock during his junior and senior years. He then moved to Los Angeles, where his movie career began. Higgins remembers when he first heard himself play on the 1980s TV show Jake and the Fatman.

"It made me feel like I was now a part of the TV and motion picture process, albeit a very small part," he says. "Years ago, when TV commercials involved more live players, I would hear myself most every night when I watched TV. That was certainly one way to get me to sit through the commercials!"

Last year, he worked with comedian Seth McFarlane and recorded three Sinatra-style records with him at Abbey Road Studios in London. They worked together on the animated movie Sing!, in which he played the sax for McFarlane's mouse character.

When Higgins sees a movie, he doesn't focus on his part but on the composer's music and his fellow musicians.

"It always conjures up memories," he says. "And perhaps a few laughs remembering the 'lighter' moments."