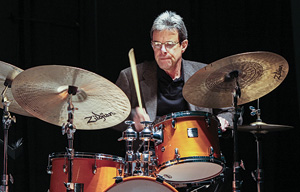 Ed Soph ('68) began performing music as a child when his father, a pianist, gave him a wooden block and set of sticks so they could play together in the evenings.

Last November, the drum professor was inducted into the Percussive Arts Society Hall of Fame, which recognizes the industry's top leaders in performance, education and composition.

"It is a very humbling experience," says Soph, who has worked at UNT since 1987. "When you are in the company of these great, great players and teachers, it is a real honor."