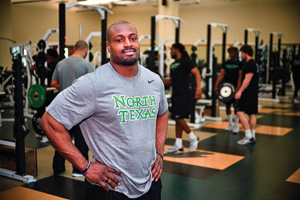 Following a successful first season at the helm of the Mean Green that included a Zaxby's Heart of Dallas Bowl appearance, head coach Seth Littrell, who recently signed a five-year contract, continues to build positive energy for the future. In addition to signing his first full class of recruits in February, he's had help from former Mean Green player Jamize Olawale, now a fullback for the NFL's Oakland Raiders.

The pro player and his wife, Brittany, are back in town finishing their UNT degrees and remembering what's special about Mean Green pride. In addition to studying, Olawale is paying forward his work ethic and dedication as he works out with the Mean Green football team twice a week.

"It's been good to be back and see all the changes, especially in the athletics department," says Olawale, whose senior season coincided with the opening of Apogee Stadium. "The program is on the way up and I can see — especially through the players and coaches — that a lot of good things are happening here." 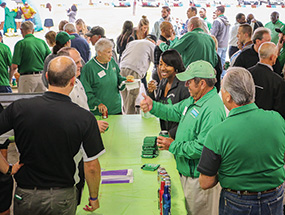 Members of the Mean Green coaching staff will travel throughout Dallas-Fort Worth May 8-15 during the Mean Green Club's annual Coaches Caravan event. The tour enables coaches to discuss past successes and expectations for the upcoming season while meeting with alumni, fans and donors.

The tour will make stops and feature family-friendly activities, including appearances by Scrappy and the UNT cheer and dance teams. The events are free and open to the public. Food and non-alcoholic drinks will be provided and a cash bar will be available.

Come cheer on the Mean Green during a preview of the football team in action at the annual Green and White Game beginning at 2 p.m. after the Hall of Fame ceremony April 8 at UNT's Apogee Stadium. Admission is free.

Read more about why Jamize and Brittany Olawale have made the commitment to complete their UNT degrees.

And get your season tickets. Fans who purchase Mean Green football season tickets before April 8 are eligible for weekly prizes, including seats in the Hub Club for a game, premium parking passes and personalized autographed memorabilia.

Ticket prices for 2017's six-game home slate, which begins Sept. 2 against Lamar and includes a Nov. 11 Homecoming game against UTEP and a Nov. 18 date against Army, are unchanged from 2016.

A new Family Pack option offers seating on the west-side sidelines for $60 per seat when a minimum purchase of four season tickets is made.

To purchase tickets and for more information, visit the North Texas Ticket Office.

Registration begins at 10 a.m. and the deli buffet opens at 11 a.m. prior to the event's 1 p.m. shotgun start. The day will end with a 6 p.m. Prairie House dinner, presentation of awards and silent auction.

Event benefits include first and second place prizes in three flights, Don January Golf Classic memorabilia, raffle items, a silent auction, the chance to win a car for a hole-in-one, and on-course contests for team putting, closest to the pin, and straight drive competition.

Mean Green and the Rangers