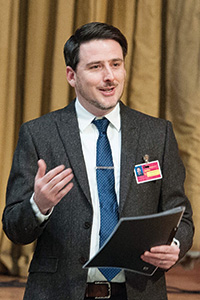 Some of David Register's ('07 M.S.) debate students at Bard College must wait for him to give them data to support their position on a topic. They can't go to the Internet themselves, and they can only go to one library. Aside from those limitations, the members of the Bard Debate Union at Eastern New York Correctional Facility are "the same as any other debate team" and as competitive, says Register, who's taught public speaking at Bard's main campus in Annadale-on-Hudson, New York, for three years. He travels weekly to the prison in Ulster County to direct the Eastern team.

"Coaching them pushes me to be a better teacher at every step," he says. "We usually meet only two hours a week, and I have to be prepared whenever I see them because they never skip assignments."

The 20 team members also are students in the Bard Prison Initiative, which enrolls incarcerated men and women in academic degree programs. During a public speaking class at Eastern's BPI campus in 2013, several students told Register that they wanted to learn policy debate. A year later, the campus held its first debate against a team from the U.S. Military Academy at West Point. Since then, Register organizes one debate each semester, inviting teams and judges from other universities to the prison.

In September, BPI debaters at Eastern defeated a Harvard University team on the topic of public schools having the ability to deny enrollment to undocumented students. The win received national and international media attention after Register wrote a column for The Guardian, which led to a Wall Street Journal story. Eastern's BPI team is preparing for its next debate in April -- the third against a West Point team. The series stands at 1-1.

"It's rewarding to know that anyone can excel at debate," Register says.

As a master's student in communication studies at UNT, he was an assistant with the debate team, where he also learned about teaching.

"I learned from faculty who were the best in the business," he says.