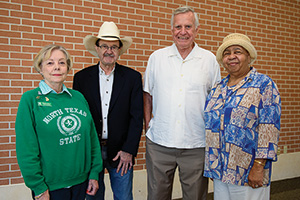 My fond memories are of dorm life in Kendall, despite not having air conditioning, and the great friends I made.

I mostly dated Delta Sigs. I especially loved homecomings when the Gamma Lambs (those pinned or dropped to a Delta Sig) helped with the float or the yard decoration, the White Carnation Ball and other theme parties.

My major was business education as my mother wanted me to be a teacher and I wanted to be in the business world. I will never forget accounting. I took the two required courses on more than one occasion. Finally, the last semester of my senior year, I received the B I needed to graduate!

North Texas prepared me for a wonderful career. While I did not teach, I became the executive director of a center for children with disabilities and hired special education teachers, therapists, social workers, etc. The center became one of the most outstanding centers in the state serving children birth to 3. After 30 years, Baylor Health Care System asked us to merge with it and I moved to Dallas as a major gift officer for Our Children’s House and Metabolic Research, a position I held for 10 years.-- Phala Williams Finley ('65)

When I enrolled at North Texas, I was Cora Lee Green, and in December 1964, I became Cora Green Wright, which means that I recently celebrated two golden anniversaries. We are a UNT family: my husband, Roy Wright ('64), and our daughters, Rebecca ('89) and Corene ('94).

Other than my academics, my most rewarding activity at North Texas was being a member of the Baptist Student Union. I worked part time as secretary for the executive director of the BSU and at Flow Memorial Hospital. The university had contracted with individuals in the city to house the African American students. Although I wasn't allowed to live in the dorms, the homeowners I lived with across town, Mrs. Alexander and Ms. Estella Garrett, were very nice. My transportation was not a real problem my first year, because my brother Charles Green (’63) also was a student and my dad allowed us to use the family car. When Charles graduated, the family car went home. Walking was the only option unless you had a good friend with transportation.

A very sad day came in November 1963 as I walked to the hospital to work. It was such a beautiful day, too. As I checked in, I was told that President Kennedy had been shot and killed -- a day in my life never to be forgotten.

After graduating, I worked for the federal government and in insurance and real estate. My time at North Texas was a learning experience that also allowed me to understand some of the roadblocks that I would encounter and what would be the way to deal with them. The 50 years since I walked the campus have been very busy, and my God has been good to me and my family. -- Cora Wright ('65)

Scared? You have no idea. At age 21, and a high school dropout, I entered the Administration Building. I felt as if I had entered the sanctum of the Great Oz. They reminded me that I had failed to finish high school; however, they allowed me to take a test and I passed it so they let me start to school on probation. I was elated but still scared. They ended up giving me a B.S. and an M.S. and a second chance in life. I am no longer scared.

My major professor was Dr. Stanley K. Hamilton, who was head of the drama department. He was a brilliant man who looked like a short, heavier version of Lenin. He would join the students daily in the Green Room. We would discuss a wide range of topics and he would challenge every word that came out of sophomoric mouths. Once I made a statement that I thought was profound, and the other students appeared to accept what I said. I felt good about myself.

Then Dr. Hamilton started to chuckle and it advanced to full-blown laughter. With tears streaming down his face he asked me to please leave because I was causing his stomach to hurt. The next day I was back, with my thoughts more organized, and ready for him to challenge me again. I learned a lot in his classes but I learned a lot more from him in the Green Room.

North Texas offered both an affordable education and excellent teachers who not only imparted knowledge, but also taught us to be independent thinkers and engaged citizens. I was involved in student government, including being student body president my senior year, but my most valuable government lessons came from the grassroots political activism on campus at that time.

I was a junior in 1964 when I reached voting age -- 21 back then -- and received my certificate of exemption from the poll tax. That tax, designed especially to keep African Americans from voting, was one of the civil rights issues that sent me down the populist path. -- Jim Hightower ('65), former Texas agriculture commissioner