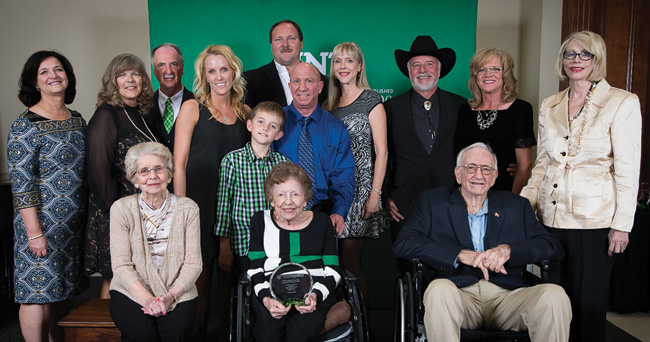 There was one household rule for Martin Luther Hoke Sr.'s nine children after high school -- if you stayed at home, you had to go to college.

"He wanted each of his children to attend," says Barbara Crosby Polansky ('77), Hoke's granddaughter.

Born and raised in Richards, Hoke Sr. was passionate about education and family, Polansky says. He earned a teacher's certificate from North Texas around 1916 and later he moved his wife, Ethel, and children to Denton, because it was a college town.

Eight of the Hoke children attended the Demonstration School on campus and six continued on to North Texas.

The family rule was passed along -- in all, 29 family members in four generations have attended UNT spanning 101 years. This fall, the family received the Generations of Excellence Award at the 2015 Distinguished Alumni Achievement Awards for extraordinary service to and advocacy for UNT.

UNT senior and soccer goalie Jackie Kerestine, Hoke's great-granddaughter, is the most recent family member to attend. She plans to become a teacher "like a lot of other women in my family," including her mother, Diane Williamson Kerestine ('85), who received her degree in elementary education. Her father, Phillip Paul Kerestine, lettered for the Mean Green football team in 1978 and 1979.

"I am really glad to be able to carry on a family tradition," Jackie says.

Polansky, who earned a physical education degree and has been a P.E. and math teacher for 38 years in the North Texas region, says UNT's high ranking as a teacher's college and close-knit environment all played a role in her relatives choosing the university.

"And it kind of was a way of continuing on what my grandfather wanted," says Polansky, whose parents, Richard Crosby ('49) and Patty Hoke ('49), also are alumni.

Her relatives who are UNT graduates include a sociologist, aerospace engineer, lawyer, journalist, and many teachers. Starting with her grandfather, Polansky says that her family members collectively have spent 250 years in the education field.

Through the years, Polansky has maintained her UNT connections with College of Education professors, and she comes back to lecture at the university regularly.

"Sharing my knowledge with the next generation is a privilege," she says.

Polansky says that she and so many in her family are inspired to continue their support and service to UNT because of its caring professors and first-rate academic programs. She also doesn't forget the great student experiences UNT provided, remembering dorm life in Kerr Hall and College Inn and marching in a parade on campus when her father became a Silver Eagle, an honor that was bestowed on alumni 25 years after graduation.

Polansky says her family is proud to support the university's mission and is dedicated to community service, something UNT embraces for its graduates. She was moved when the university honored her family's service this fall.

"My grandfather was the beginning force for all of us," she says. "Because of him and UNT, we are lifelong learners."