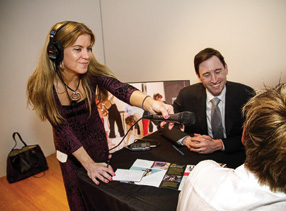 Amy Bishop ('04) uses her love of radio and classic music to help her dig deeper into the stories she reports at News 88.7 in Houston.

"It's all about being able to tell a story," says Bishop, who covers arts and culture for the station.

Bishop wanted to work in radio since high school but decided to major in German because of an interest in different cultures. As a UNT freshman, she jump-started her radio career at campus station KNTU as the early Sunday morning disc jockey. She worked her way up to weekday shifts, joined the paid staff and was program director her senior year. She says news manager Mark Lambert influenced her to be better at what she does.

"He runs it like a mainstream radio station," she says.

In her second year, she studied abroad in Tübingen, earning advanced German credits toward her degree. After graduating, Bishop worked as an anchor and reporter for KRLD and Texas State Network in Dallas. A year into the job, she became an airborne traffic reporter for KRLD.

"It was fun but stressful," Bishop says. "After an engine failure with an emergency landing in Collin County, I was ready for a change."

In 2009, she was invited to WRR 101.1 Classical in Dallas as the new host of its morning show. She later was host of the station's midday show, At Work with Amy, before she moved back to her hometown of Houston in 2012.

While at WRR, she earned a spot on Dallas' Wall of Honor on two different occasions. The award is offered to city employees for the quality of their work and how it enhances the quality of life in the city.

"I don't know who nominated me other than that the first award was the result of a nice email from a listener," she says. "It was a huge honor."

Outside of the studio, Bishop is a self-proclaimed Beatles know-it-all and dance enthusiast. She says pursuing a career in radio is competitive, but she encourages students to stick with it because the climb is worth it.

"It's important to set your ego aside, especially when you're starting out," Bishop says. "It's an endurance test."