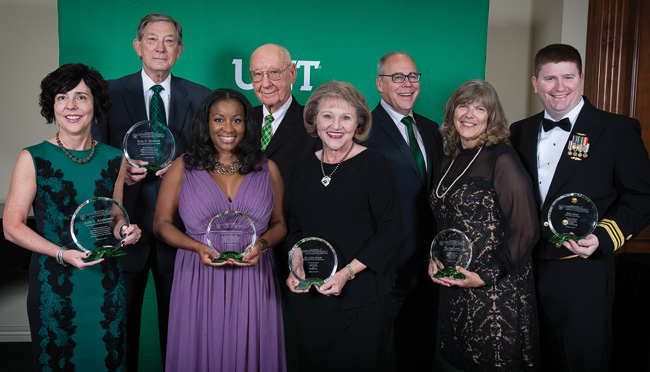 Alumni were honored during Homecoming Week at this year's UNT Distinguished Alumni Achievement Awards for entrepreneurship, philanthropy and service to their communities and university. The awards program, marking its 50th anniversary, celebrated the achievements and service of seven recipients. Honors included the Distinguished Alumni Award, one of UNT's most prestigious, presented since 1965 to individuals who have earned prominence and accolades for their professional accomplishments. The Distinguished Young Alumni Award honors alumni under 40 for distinguished achievement.

"We're so proud of our alumni award winners. This year's recipients are an impressive group of visionaries and leaders who are making a difference in the world and bringing distinction to UNT," President Neal Smatresk says. "Our alumni are such a big part of who we are at UNT They are our legacy."

Julie Anderson is chief financial officer at Texas Capital Bank, and controller and chief accounting officer for its parent company. She manages accounting and external financial reporting functions, as well as financial planning and funds management. Texas Capital Bancshares was a start-up in 1998 and has grown to more than $10 billion in assets.

After earning her bachelor's and master's degrees in accounting, she began her career in assurance services as a CPA with Ernst & Young LLP.

She and her husband, David Anderson ('99), owner and founder of Anderson's Pro Flooring in Lake Dallas, are active members of the Mean Green Club and serve as club representatives.

Bob Kimmel is the past president and CEO of Davis H. Elliot Co., which he grew from 500 to more than 1,700 employees, and owns BK Energy, a gas and exploration service company in Tulsa, Okla.

He is chair of the UNT Foundation board and has been a campaign action team member for the College of Business and the athletics department. He previously served as a board member of the UNT Alumni Association.

After earning his accounting degree from UNT, he graduated from Harvard Business School in 1982.

Leroy Whitaker is retired from Eli Lilly and Co., where he started work as a patent attorney and advanced to general patent counsel and assistant secretary with 30 attorneys and agents reporting to him in a job that took him all over the world.

He earned his bachelor's and master's degrees in chemistry at North Texas, later receiving his doctorate in organic chemistry from the University of Illinois. He went on to become a research chemist for Shell Chemical Co. and later worked for Jefferson Chemical Co. before moving to Eli Lilly.

He serves on several advisory boards at UNT and is a life member of the UNT President's Council. He established the Whitaker Charitable Trust to fund the Dr. Leroy Whitaker Scholarship.

Tiffaney Dale Hunter is the chief communications officer for the Barbara Bush Houston Literacy Foundation and formerly the president and CEO of Tiffaney Dale Public Relations, a full-service marketing and public relations company in Dallas and Houston.

She has served on the host planning committee for several organizations, including the Children's Defense Fund and Community Partners of Dallas. She also was a judge for UNT's inaugural Sherman/Barsanti Inspiration Awards.

She received the Dallas Black Chamber of Commerce's 2013 "Quest for Success" Business Award, received the 2012 "40 under 40" awards for both the Collin County Business Press and the Dallas Furniture Bank and was selected by Sterling Bank as a nominee for "Texas' Most Inspiring Women."