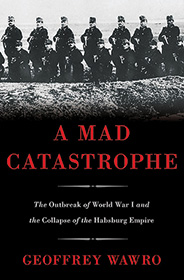 In his latest book, A Mad Catastrophe: The Outbreak of World War I and the Collapse of the Habsburg Empire (Basic Books), history professor Geoffrey Wawro fills in a neglected but crucial aspect of World War I: the disastrous diplomacy, strategy and military performance of Austria-Hungary -- which caused the war and doomed the German-led alliance by eroding the army's military effectiveness.

Wawro, director of UNT's Military History Center, has a personal interest in the subject.

"My paternal grandparents came from Austrian Galicia -- today's western Ukraine -- and my grandfather served in the Austro-Hungarian army before immigrating to America before the World War I," he says.