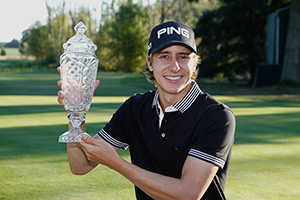 Carlos Ortiz ('13) has always loved to play golf. As a boy watching his parents and grandfather play at their local golf club in his hometown of Guadalajara, Mexico, he was inspired to take up the sport. Now, he's a professional.

The former Mean Green golfer's career success began with the 2013-14 season on the developmental Web.com Tour. His peers voted him the Web.com Player of the Year, and his three tournament wins -- at the Panama Claro Championship, the El Bosque Mexico Championship and the WinCo Foods Portland Open -- earned him an immediate promotion to the PGA Tour and fully exempt status for the year.

Ortiz is only the sixth Mexican-born golfer to gain PGA Tour eligibility.

"I'm very proud. Getting to represent my country is a great honor," he says. "And being on the PGA Tour has been a lifelong dream for me."

In high school, Ortiz was on the Mexican National Junior Golf Team and was a top-ranked player in the Mexican Federation of Golf. As a high school senior in 2009, he finished second at the Byron Nelson Junior Championship.

When choosing a college, Ortiz wanted someplace that was relatively close to home. He says he learned to believe in himself while at UNT, where he earned a degree in international studies, but knew it was going to take effort, practice and sacrifice to achieve his goals.

"What drives me to keep on practicing and playing better each day is that feeling you have when you make the perfect shot," he says, "and then you just want to keep hitting it like that."

Ortiz was the first player to commit to the Mean Green golf team following the hiring of head coach Brad Stracke in 2009.

Stracke says that Ortiz was a talented player who grew while he was on the team.

"His confidence and maturity caught up to his talent and he developed into a great player," Stracke says.

Ortiz was an integral part of the team's success as it played for the Sun Belt Conference Championship three years in a row, winning in 2012 and 2013. Ortiz won the individual championship title in 2011.

He says his Mean Green days taught him about patience and teamwork.

"Golf is a game of keeping calm and being patient," he says. "You have to believe that all the hard work will help you in the future."