Learn about Tiffany Jiang, a TAMS student who is conducting forensic science research to help to determine identities that were lost before she was born. 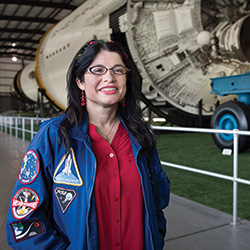 Laurie Y. Carrillo's ('94 TAMS) work has to survive in a tough place -- space. As a thermal engineer at NASA, Carrillo creates the calculations so hardware -- such as payload experiments on the International Space Station -- can withstand the extreme hot and cold temperatures in orbit.

"I get to see the payloads go from a computer screen to the robotic arm installing them on the station," she says. "It is very rewarding, and also kind of humbling, to see my little piece of the puzzle that I am able to contribute."

Carrillo can trace her career at NASA to her time at UNT's Texas Academy of Mathematics and Science (TAMS), which is celebrating 25 years since graduating its first class.

One of only seven residential programs in the nation, TAMS allows talented high school students to start their first two years of college early and gets them on the path to a STEM career faster. TAMS does so by pairing incoming students with faculty scientists, and those professors encourage students to make original contributions to the fields of mathematics, engineering and physical and life sciences. TAMS undergraduates frequently boast co-authorship of their professors’ manuscripts, including research with international impacts. TAMS graduates are pioneers in their professions — everything from thermal engineers for NASA to neurosurgeons to plant scientists at Carnegie Mellon — while fulfilling the state and nation’s need to have top-caliber STEM expertise.

In 1987, TAMS became the nation's first accelerated residential program for students to take research-focused university classes while earning the equivalent of a high school diploma, and it since has graduated 4,000 students. These students consistently win and are finalists for the most prestigious competitions for high school students in math, science and engineering — the Barry M. Goldwater Scholarship and Excellence in Education Program, the Intel Science Talent Search and the Siemens Competition in Math, Science and Technology, as well as the Coca Cola award and even from the Gates Millennium Scholarship Foundation.

"One of the most significant opportunities TAMS students have is to be mentored by UNT professors, who are at the cutting edge of their fields," says Dean Glênisson de Oliveira, who joined TAMS in January. "In this environment, our talented students flourish and go on to make significant contributions as researchers and scientists."

Carrillo is one of the 85 percent of TAMS alumni who earn undergraduate and graduate degrees in STEM fields. They are solving real-world problems, from designing materials for space to creating better medical devices, practicing high-risk neurosurgery and fighting malaria. And they credit TAMS for providing them with faculty mentors, research projects and scholarship opportunities that paved their way to success.

Carrillo remembers lying on her dorm room floor at McConnell Hall, the residence hall dedicated to TAMS students, filling out an application for a scholarship sponsored by NASA.

"That application," she says, "really changed my whole life."

In earning the scholarship and the internship that came with it, she fulfilled a dream to work for the space agency that was sparked in her childhood when she saw astronaut Sally Ride on Sesame Street.

The San Antonio native learned about TAMS during a summer math camp at UNT. While at TAMS, Carrillo participated in two internships that focused on biomedical engineering and geophysics -- giving her a taste of industry research. The NASA scholarship allowed her to work summers at the Johnson Space Center while she attended Rice University.

Currently, Carrillo is teaming up with the Japanese space agency Jaxa, which will use its vehicle to replace nickel hydrogen batteries with lithium ion batteries at the space station. She also is working with commercial companies Space X and Orbital Sciences Corp., which launch cargo to the station.

She teaches at Rice and the University of Houston at Clear Lake and often speaks to high school students about her career.

"I never had a female Hispanic engineering professor," she says. "Now I'm going to be able to share that experience." 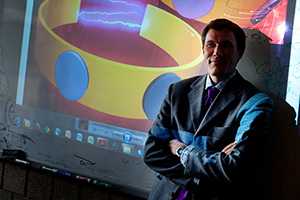 Chris Bettinger ('99 TAMS) wants to make it easier for people to take their medicine. He researches biomaterials- based medical devices as an assistant professor of materials science and biomedical engineering at Carnegie Mellon University in Pittsburgh, Pa.

He says he has liked solving problems ever since he attended TAMS. He worked with Kent Chapman, Regents Professor of biological sciences, to help extract different plant tissues as natural sources of small lipid molecules that could extend the life of flowers, research which he entered in the Siemens competition. Chapman remembers Bettinger's "tenacity and staying power," traits essential in researching new materials, which may not always pan out.

Bettinger earned his bachelor's degree in chemical engineering, master's in biomedical engineering and doctorate in materials science and engineering at the Massachusetts Institute of Technology. He was a finalist in MIT's $100,000 Entrepreneurship Competition for his part in creating a device that controls the release of drugs around the site of hip replacement surgery.

He's received several patents for his work in making polymers stretchable, so when seeded in cells, they can grow and be used for wound healing and tissue regeneration. They also can be used as materials for ingestible electronics for smart drug delivery systems or noninvasive biosensing.

"You have to be an eternal optimist," he says, likening it to baseball players who are more likely to get an out than a hit. "You have to be persistent with risky projects that might fail because the payoff could be a transformative idea or technology." 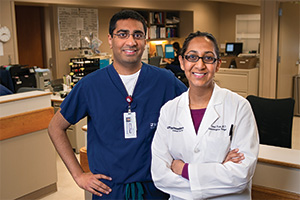 Many people would see neurosurgery as an intense field. But siblings Toral Patel ('99 TAMS) and Ankur Patel ('05 TAMS) see it as a way to change lives. Toral, a neurosurgeon and researcher, and Ankur, a resident in neurosurgery, both work at UT Southwestern Medical Center in Dallas.

At TAMS, Toral studied cardiac perfusion at the UNT Health Science Center in Fort Worth and enjoyed the investigative aspects of science.

"TAMS inspired me to not just be a doctor, but to be a doctor who's constantly questioning and innovating," she says.

She earned her bachelor's degree in biomedical engineering at Johns Hopkins University and her medical degree at UT Southwestern, where she returned last year after a residency at the Yale School of Medicine. Now, she researches nanoparticle-based drug deliveries for the central nervous system.

Ankur Patel followed his sister to TAMS and, under the guidance of UNT biology professor Jannon Fuchs, studied primary cilia and their possible significance in neuron formation, diseases and defects.

That research led to his recognition as a 2005 Barry M. Goldwater Scholar. After TAMS, he graduated from the University of Pennsylvania and earned his medical degree from UT Southwestern.

The Patels also have collaborated on cases with their older sister, Shivani Patel, an assistant professor of obstetrics and gynecology at UT Southwestern. Together, they removed a brain tumor from a woman who was 26 weeks pregnant.

Helping high-risk patients is challenging but rewarding. Ankur says he often sees patients, many young and in the prime of their lives, after a bad car accident.

"Some don't survive their head injuries," he says. "But, there are other times we can intervene through surgery and save patients' lives. They walk out of the hospital and go back to their families, friends and jobs. It is those moments that you cherish." 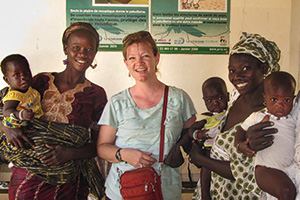 Thwing, who grew up in Cameroon where her parents served as missionaries, attended high school in Duncanville. She learned about the TAMS program when a student spoke to her math class.

While at TAMS, she researched the effects of low water oxygen concentration with biology professor Tom Beitinger, won a fellowship to study the effects of altitude on exercise -- and gained the experience and skills to be admitted to one of the country's most prestigious universities.

"I wouldn't have made it to Harvard if I hadn't been through TAMS," Thwing says.

During college, she took a year off to volunteer for a public health outreach organization in Cameroon, which inspired her to pursue a career in international health. She attended medical school at Vanderbilt University, completing a residency in internal medicine and pediatrics, then worked for the Centers for Disease Control and Prevention's Epidemic Intelligence Service.

She's been with the CDC ever since, working for its malaria branch in Atlanta until 2012, when she moved to Senegal to serve with the President's Malaria Initiative. Thwing also has tutored Somali Bantu refugees and traveled to Africa and Haiti to help people battling tuberculosis and HIV.

"I love my job," she says. "It's the combination of a fascination with science and the ability to have an impact on the lives of other people."