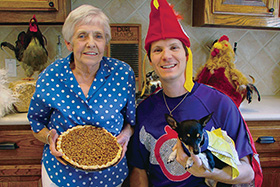 David Chicken is the children's music performer who has released three CDs and two DVDs and won three Emmy Awards from the Lone Star Emmy chapter.

McMahon, who majored in communication design with a minor in radio, television and film, took many music classes and had written funny original songs that didn't fit with the local bands he was in at the time.

"So I made one CD under the name David Chicken and, much to my surprise, kids and parents alike loved the music," he says. "I loved performing it and they say to do what you love, so I did more of that."

During his act, his dog Chihuahua Super Joanie performs tricks in between songs. He has entertained families of U.S. Navy members in Guam, Italy, Japan and Spain. His mother, Jane McMahon, helped build the show and rapped as "Mama Chicken" before she passed away last year. She helped foster art and music in McMahon, paying for private lessons and taking him to many live shows. McMahon recently launched a charity, Mama Chicken's Kitchen, in honor of his mother to help provide food and supplies for the homeless in Dallas. 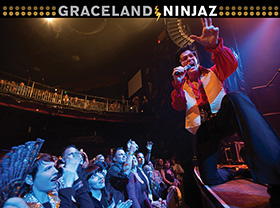 The Dallas resident also co-owns the graphic design firm Bottle Rocket, which specializes in corporate branding and marketing. On most weekends David can be caught singing and rapping in the Elvis-inspired band Graceland Ninjaz, which performs across the nation.

"UNT instilled a sense of adventure and wonder, and a yearning to achieve big goals," he says. "I find that I am one of the few people I know who actually have a career doing exactly what they went to school for. I credit UNT -- and my mom -- for allowing that to happen."