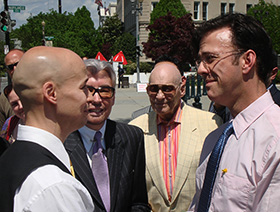 Alumni Pat Dwyer and Stephen Mosher met in the green room of UNT's drama department in fall 1985. It was love at first sight, and the two, who now live in New York, have been together ever since.

The 2013 documentary Married and Counting, directed by Allan Piper and narrated by George Takei, followed Dwyer, right, and Mosher, left, as they celebrated 25 years together and embarked on a journey to get married in all the states that had legalized same-sex marriage -- Vermont, New Hampshire, Iowa and Massachusetts, and on the steps of the Supreme Court Building in Washington, D.C.

"Though we couldn't gain equality under the law in every state, we wanted to seek the maximum protection we could get," Dwyer says.

The documentary also follows the couple to their homes in Texas where they visit their families and make a stop at the RTVF building on campus. Many of the friends they made at UNT are still in their lives, and they plan to have a reunion if or when same-sex marriage becomes legal in Texas.

"Our friend Christine Stinson Wetzel insisted she host a ceremony in her home," Mosher says. "It will be a party of epic proportions."

Mosher has been a photographer for 34 years and also is a personal trainer and a columnist for Edge magazine. His love of photography began at UNT, where he taught himself as he photographed friends.

Dwyer is an actor working on the stage, performing on television and recording voice-overs. He recalls UNT's entry into the American College Theatre Festival with a production of Children of a Lesser God.

"Being bound together as a company was a magical time," he says.

Dwyer says that Married and Counting brought the couple closer together and helped them realign their lives with their true selves. They plan on resuming the weddings in the spring.

"Married and Counting was all about love and showing the world that our love is the same as anyone else's," Dwyer says.

"If that's activism, then we are activists," adds Mosher.