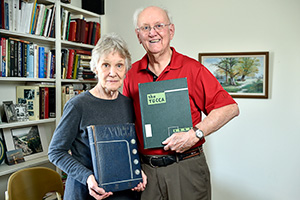 My perspective on growth and change at UNT comes in two parts. One is from summers in the mid-1930s when my dad, William True Lovelace ('38, '40 M.S.) was completing first a baccalaureate and then a master's degree in education at North Texas.

We lived near campus, and I spent lots of time playing on those shaded grounds, admiring, from afar, the President's Home, hearing 'Fessor and the Aces outdoors (weather permitting), enduring organ recitals in the Main Auditorium and skating on curvaceous sidewalks. I remember attending Demonstration School where my dad was the principal, having lunch at the boarding house where he and my mother, the former Cleo Wayne Crandall, had met, and enjoying the serenity of a pre-war campus.

In 1949, when I returned as a mid-semester freshman, the post-war building boom had produced or was producing the all-male Quads and a new Journalism Building. Talk of a new gym was in the air. The golf team won the NCAA championship four years in a row, and, as editor of the 1952 Yucca, I broke tradition by opening the sports section with a double-page wire service photo of my classmate, Billy Maxwell, winning the 1951 U.S. Amateur golf title. Football, featuring a darn good running back named Ray Renfro (later with the Cleveland Browns), came next, then basketball, track and field.

With encouragement from faculty advisor J.D. Hall, the Yucca spent extra bucks that year hiring a Dallas-based fashion photographer, Max Plake, to shoot the student-elected "beauties." The beauties' gowned full-page vertical pictures continue to dazzle me each time I look through the book. The Who's Who pages likewise benefited from Max's keen on-campus individual portraiture.

By 1952, local chapters of national fraternities and sororities were on the scene, urged there, I've been told, by Dean Imogene Bentley as an antidote to the historic local groups. The Campus Chat was honing the skills of rapidly employable journalists like Bill Brammer, subsequent author of a novel about a not-too-disguised Lyndon B. Johnson, and an international news service reporter named Ray Moseley.

Music majors like Monte Hill Davis, Ivan Davis, Dale Peters and Juanita Teal (later Mrs. Dale Peters) were setting high pre-professional standards, the Great Chorus was singing with the Dallas Symphony and Frank McKinley's A Cappella Choir was about as good as it gets at the collegiate level.

My dad said that in the summer of 1937 Dr. Wilfred C. Bain organized some of the sizable number of music teachers and singers on hand into the first a cappella choir. My dad was in it and, through the years, spoke proudly of it. In doing so, he unwittingly set a goal for me. And in the fall of 1950 I tried out with Frank McKinley and made it! The choir toured as far away as southern Illinois that year and recorded a Bach double motet and other choice vocalise at a studio in Dallas. The aforementioned Juanita Teal, by the way, was also in the choir.

Yearbook duties, courtship opportunities and, of course, occasional homework filled my senior year, 1951-52, so I had just the one year in the choir.

From my parents' days there in the 1920s and '30s to mine and my wife's in the 1940s and '50s, North Texas outgrew its "teachers college" status and began the ongoing march to international recognition as a multi-sited, multi-purpose university that, by the way, still harvests a mighty fine crop of school teachers.

Lovelace earned a master's in religious journalism from Syracuse University and retired as editor of the national weekly newspaper, The United Methodist Reporter.